• In a series of tweets which they later pulled down, MCSK said they distributed royalties to all their 13,967 members.

• The organisation said it had not received a dime from any broadcasters who exploit music. 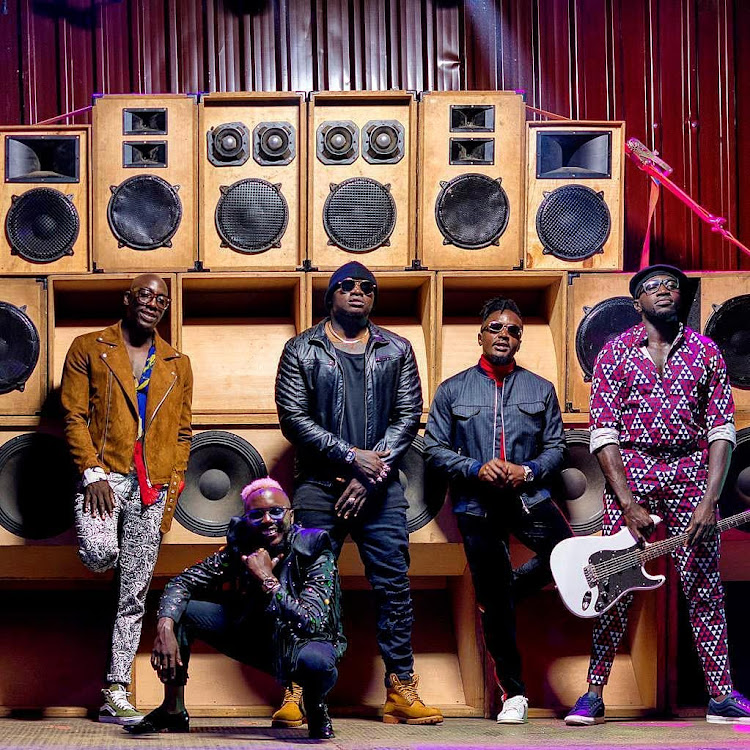 The Music Copyright Society of Kenya has come out to publicly defend itself over the 'meagre' amount they paid to Kenyan artistes.

The organisation came under attack from Kenyan artistes and their fans after it was discovered that they offered Sh2,500 each to the musicians as royalties.

The outcry came after popular musicians Khaligraph Jones and King Kaka posted on their social media pages of their M-Pesa messages which showed they received  Sh2,500  for their hard-earned work.

In a series of tweets which they later pulled down, MCSK said they distributed royalties to all their 13,967 members.

"It's PPP distribution [Performance in Public Places] these are collections from public places for only two months," MCSK said. 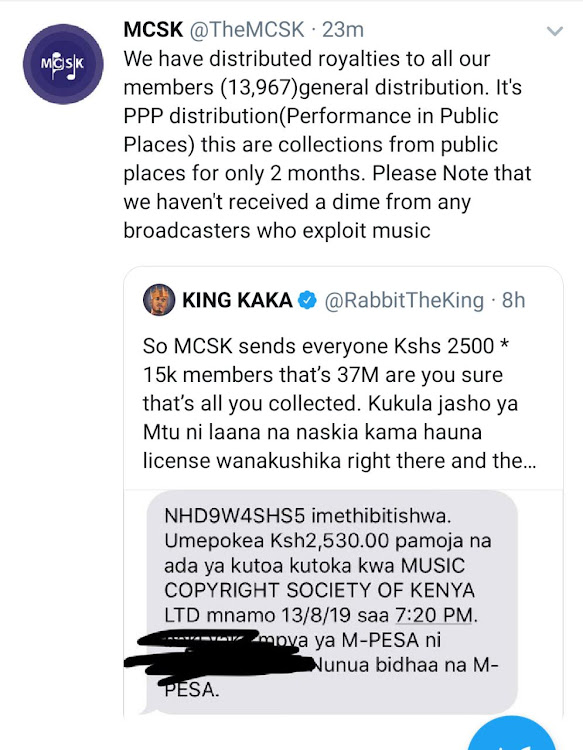 The organisation said it had not received a dime from any broadcasters who exploit music.

"We made a general distribution because if we strictly followed scientific distribution then 70% of the money collected will be paid to the international societies. We all know that Kenyan music receives little airplay. The figures you'd receive would be less," reads the tweet.

Kenya's top rapper Khaligraph Jones on Tuesday, took to Instagram to tell off MCSK over the small pay.

The Juu ya Ngori hitmaker even went further to give authorisation for his music to be pirated.

For years, Kenyan artistes have been pleading with MCSK over their pay through the campaign, "Pay Our Dues, Please." 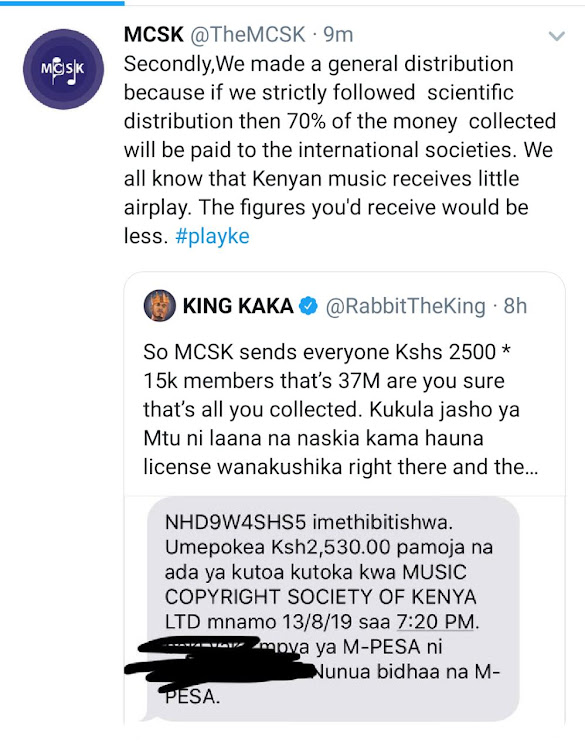 This has seen the artistes attend meetings year after year as they marched in the streets to protest the lack of payment of royalties.

Elani in 2016, revealed they had received royalties of Sh31,000 from MCSK for their songs played on radio and television for that year.

The three-member band was baffled by this amount, which they termed as 'peanuts', despite their songs Kookoo, Milele, Zuzu, Dunia ya Barua and Hapo Zamani were on heavy rotation.

After raising their concerns with MCSK, they were later pacified with a “compensation” of Sh300,000.

P -Unit's Boneye vented his frustrations on Facebook when he claimed that three years ago MCSK tried to pay the group Sh250 for Kare, a song that was at the top of African charts at the time.

“People should not rubbish Elani’s attempt at demanding transparency from MCSK because they are opening artistes’ eyes to what is going on. Copyright owners have a huge problem because broadcasters, too, are not paying royalties; this money is not getting into artistes’ pockets. Everyone wants to eat but no one wants to pay the artiste who has done all the work,” Boneye said.

He said he is grateful that Elani came out because it always seemed like artistes are always complaining, but now the public has seen exactly why.

Lingala ya Yesu hitmaker Pitson earned Sh5,000 for the song that catapulted him to fame in the entertainment scene.

RAPPER Abbas Kubaff has faulted the Music Copyright Society of Kenya (MCSK) for lack of transparency. The former K-South member has accused MCSK for ...
Sasa
8 years ago

It's MCSK versus musicians

There was drama at Silver Springs Hotel in Nairobi on Friday when the police threatened to shoot musicians.The threats came after the meeting ...
Sasa
9 years ago
Post a comment
WATCH: The latest videos from the Star
by LYNDSAY NYAWIRA
News
14 August 2019 - 11:32
Read The E-Paper