How inmates con you from prison

• Prisoners are brainstorming on how to cheat you with many scams using their smartphones. Some threaten you with murder.

• Prison authorities admit there' is crime in prisons and colluding officers are a problem. They say the are grappling with rogue officers. 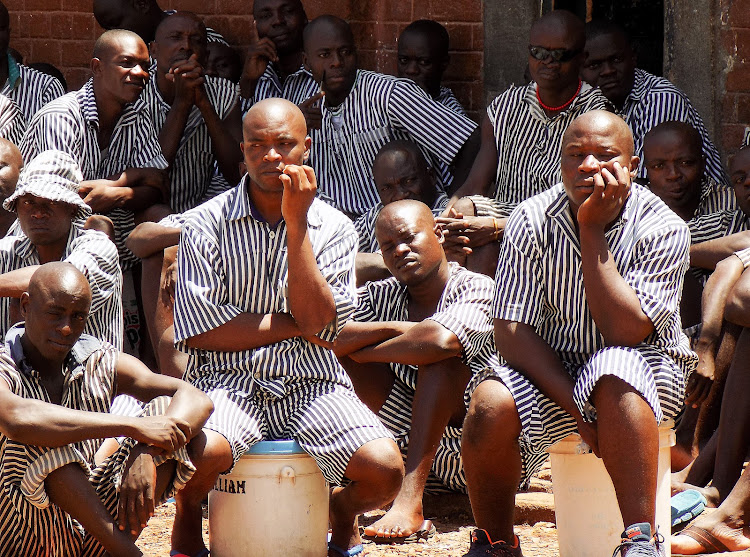 Behind heavily fortified prison's gates, about 57,000 men are confined in a world that for most is grey and violent.

It's a  grim life. No family or friends, no privacy, no free will, filthy dorms crowded with dozens of men sleeping without mattresses, no proper toilets, living under the suspicious gaze of menacing guards.

But not for everyone.

Inmates with some money and influence use to acquire more.

Some with smarts and connections are able to live like royalty (relatively), with private cells, mattresses, flush toilets, satellite TV and other amenities. The food is good and liquor is available.

"In prison there are classes. If you have money, you enjoy luxury. You sleep on a mattress and eat good food," said ex-convict James Kuria (not his real name), who served Manyani Prison for nine years in Mombasa.

The Star interviewed five ex-convicts for this article, meeting some at restaurants in Nairobi's CBD and phoning others.

The 67-year-old ex-conKuria was convicted of defiling a 13-year-old girl in 2007. It was her word against his.

He says dormitories in his prison were named after famous estates in Nairobi.

There was Runda, Muthaiga, Korogocho and Dandora.

Just as Runda is an estate for many of the country's wealthiest individuals, the same is true in prisons.

"A person from Runda gets favoured in prison. The officers are a bit lenient. The inmate doesn't have to shower with 100 other men. Fellow inmates respect them, Kuria said.

These men carry on their life of crime and they're abetted by the very people who should put a stop to their business — but they are rewarded to collude and look the other way.

They can pull strings with smartphones from the confines of their cells and monitor and run their businesses.

Efforts to get a comment on Friday from the Commissioner General of Prisons Wycliffe Ogallo were unsuccessful;  as several phone calls and text messages went unanswered. Police spokesman Charles Owino said he was not in a position to comment as he was in meetings. The same was true for  Kenya Prisons spokesman Dickson Mwakazi.

How do they make money in prison?

Each day they are brainstorming better ways to steal more money.

One former con artist in prison called phone users and informed them they had won cash prizes, especially from mobile service providers.

“It was easy for us to con someone by telling them they won a cash prize. The huge amounts mentioned confuse the individual into believing the trick,” Kuria said.

Kuria and his two friends would call the'winner'.

Once the call went through, they would welcome them  to the Communications Centre Promotion Department.

"Then, we'd quote a figure like Sh1,000,000 and tell them they won the amount because the last airtime they topped up had a winning number."

They would promise to send them the cash through their cash transfer account.

The gang would ask the victim if they had a twin-Sim phone. If not, they advised the customer to get another phone so that they use both networks during the complicated process of receiving the cash prize.

The gang then ran the victim through a complicated process that involved giving their  PIN.

“A number of them were too greedy to realise they are being conned,” he said.

Once they received the authorisation code and with the phone number of the customer, they immediately sent the details to their contacts who were waiting around withdrawal shops and ATM machines ready to withdraw.

“We always had people at waiting for details to withdraw the money. It was like a full-time job for them.”

They would then send the rest of the cash to the convicts through one of the online cash transfer systems to another line in prison.

Kuria said they had informers outside who gave them customers. He said their preferred targets were house helps or watchmen.

"Watchmen and house helps were very excited to hear about winning big money, so they would readily reveal their details."

He said that the gang preferred the house helps or guards that use familiar cash transfer systems, allowing them to withdraw 70,000 and above.

Kuria said he used the money to buy stock for his wine and liquor store.

After two years of robbing innocent Kenyans, he boasts of adding two liquor stores in coordination with his wife.

Kuria monitored his businesses in the comfort of his 'Runda' dormitory before he was released in November last year.

James Njehia (not his real name) made Sh360,000  on a 'good day'. Njehia had outside informers who did research on wealthy people.

After identifying the target, the informers were required to follow him or her, then advise on their whereabouts.

Every morning Njehia bought 10 to 15 registered lines, scratch cards worth Sh3,000 from a fellow inmate.

The Sim cards were sold at Sh300 to Sh500 a piece and the money was repaid in the evening after business without fail.

Once the informers gave Njehia the whereabouts of the rich targets, Njehia would call them.

"Hello, are you Martin Waweru? I know you and I can see you. You are dressed in blue and have parked around Kencom. I want your head," Njehia threatened.

He said he knew that people feared death and they would do anything to stay alive.

The ex-convict would continue the phone conversations, giving detailed information, such as, "I can see you scratching your ear."

At this point, most terrified targets asked what he wanted.

After the money was sent, Njehia would quickly transfer the money to his gang who were already strategically positioned at cash withdrawal points.

They would swiftly withdraw various amounts, take their 10 per cent commission and send back the balance to a different line.

Njehia would then pick a new line and repeat the process.

The millions he made in prison has built his current home in Ruai.

They ex-cons say that in prisons they can comfortably do their con businesses in peace as the long arm of the law rarely reaches into prison cells.

When asked whether any prisoner has been caught defrauding Kenyans, ex-con and police sources laugh.

In 2017, remandees from the Industrial area hacked an online network with a smartphone and withdraw Sh2.5 million in a day.

They were arrested and sentenced.

Kartello says he googled good houses on the internet and posed them at a much cheaper price.

He then got numerous calls from clients asking to view the properties.

Kartello, who was cooling his heels in Kamiti on Robbery with violence charges, would exploit the client's desperation for a great deal.

He would then tell the 'clients' the house was taken, then later at night he would call and inform them,  one who sounded especially naive, that the house was vacant.

Kartello said most students sent him money immediately to book the house upon his request as he claimed to work for a renowned real estate agent.

He said his main targets were students seeking bed-sitters and one-bedroom houses.

"Most young people have a small budget but want to live in high-end places like Westlands, Kilimani, Kileleshwa and Lavington," he said.

Fearing that someone else could identify the house and pay for it overnight, they rushed to send a small booking fee while others paid the full amount.

Kamiti Maximum Prison deputy officer in charge Gerald Ongume told the Star on Wednesday the Kenya Prisons Department is grappling with the challenge of rogue officers.

“It is real that some of those cons who dupe innocent citizens to part with their cash are in Kamiti they are hardcore criminals,” Ongume said.

He was responding to a question by the Star whether it is true some of those who extort Kenyans either through threats or enticement are inmates,

Ongume emphasised that it is difficult to deal with the crime since some of the officers were involved in the scam.

Prison authorities have called for the Senate’s help in preventing mobile phones from getting into maximum-security prisons.

They say keeping mobiles out of prisons has become a huge problem.

There's only one metal detector at Shimo la Tewa Maximum Prison and it's broken; they need six good ones.

The phones pose a security challenge in the correctional facilities. They let inmates communicate with each other, fellow criminals outside and help them commit fraud to rob people outside.

“The searches done here are largely manual. This is not as effective as it should be,” he told the committee that had toured the facility last week.

The committee also visited the Kilifi Prison and Kwale Prison.

Senior assistant commissioner of prisons Patrick Mwenda has said authorities have failed several times to get the government to increase funding to the Prisons department to purchase jammers and detectors.

“We have included theses in our budgets for years but we have never been successful," Mwenda said.

"Men can stash three phones in their backside or front side for women,” he said.

He said, “many Kenyans have lost hundreds of millions of shillings to these conmen who are usually traced to Kamiti and other maximum prisons."

Still, some inmates have left prison reformed and better skilled to earn a living on the outside.
News
3 years ago