I don’t care about my successor, Uhuru says after Sudi’s outburst

President says all that matters is working for the people 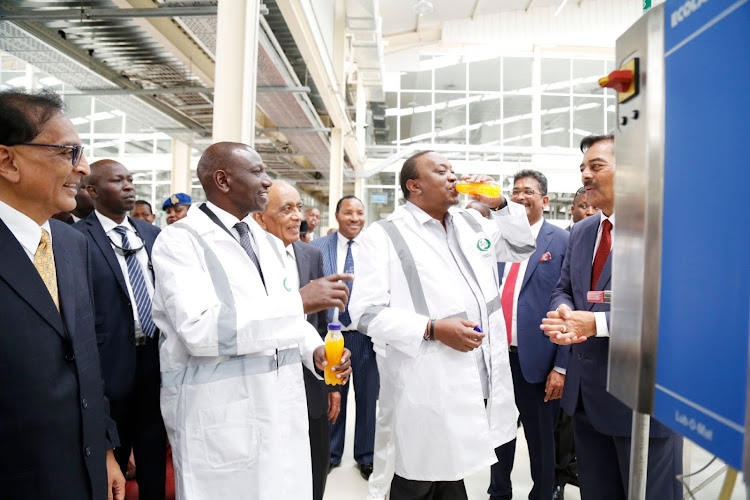 President Uhuru Kenyatta has for the first time declared that he doesn’t care about his 2022 successor, dealing a blow to his deputy William Ruto who has been banking on his support.

The surprise statement came just a day after a key Ruto ally claimed the bond between Uhuru and Ruto had been shattered and their public camaraderie was fake.

"When Ruto keeps on saying that all is well no one can believe that anymore,” Kapsaret MP Oscar Sudi declared on Wednesday.

Speaking while presiding over the opening of Bidco Industrial Park in Ruiru, Uhuru said he was not interested in who will succeed him.

“The person who will be elected would be elected. It’s God who knows. Me I don’t mind,” Uhuru declared at a function attended by Ruto and ODM chief Raila Odinga.

But in a bid to diffuse growing tension that hit a crescendo after the Monday graft purge, Ruto in a surprise twist said he was proud to be Uhuru’s deputy.

"I am a very proud deputy of Uhuru Kenyatta," he said on Thursday during the interment of former Gatanga MP Peter Kenneth's mother.

We are supportive of the President's unity and development agenda for Kenya. Working in unison and speaking with one voice will achieve a stable, harmonious and prosperous country. pic.twitter.com/jD0Mk36s56

The DP had earlier made a similar statement as he hailed Jubilee’s track record in Ruiru.

“Your excellency, we are very proud as members of your team to work with you as you personally take charge of the public private partnerships and discussions that have facilitated this kind of investment,”Ruto said refereeing to the new Bidco investment.

But once again, the President urged leaders to stop what he termed endless politicking, saying no matter how far they stretch, it’s God who will determine who will be elected president.

“There is no need of politicking all the time. No. Let’s work… Now it’s time for work. Tell your leaders we want work, we want people to unite, we want people to work together so that we can raise the standards of living for Kenyans,” he stated.

Uhuru had promised to serve for ten years and hand over the baton to his deputy, a pledge the DP’s allies have been pushing him to honour.

However, Uhuru has been sending mixed signals and in November last year declared that his choice of successor would be a surprise.

Yesterday, Uhuru once again vouched for his handshake with Raila, a political deal the DP and his allies have termed Kenya’s “worst political fraud”.

“I am pleading with all Kenyans, let us unite, come and let's work together , come let's fight corruption and ensure that public money, tax that we collect on Kenyans' behalf, should be used to improve the standards of living of Kenyans,”Uhuru said

On Monday, the graft purge hit at the heart of DP after the dams scandal eventually brought down most of his allies, including Treasury Cabinet Secretary Henry Rotich.

Ruto had months earlier rubbished the scandal as “flat lie” as his allies went for the jugular of Director of Criminal Investigations George Kinoti whom they accused of being used.

Ruto has previously told Uhuru to his face that no money was lost in the Arror and Kimwarer dams and accused investigating agencies of “selective prosecutions, devoid of facts and propelled by lies”.

“Selective prosecution targeting predetermined individuals and projects, and steamrolled by a narrative of convenient lies and falsehood and propaganda, is not a fight against corruption. It’s impunity, it’s politics, and it’s headed in the wrong direction,”Ruto declared in March.

In a clear signal of the bitterness in Ruto’s camp, Senate Majority Leader Kipchumba Murkomen rubbished the arrests as a “publicity stunt being used to play politics.”

“I can see deliberate efforts to satisfy short term political interest…We are not fighting corruption but just lying to Kenyans,” said Murkomen.

But speaking Thursday, Ruto paid glowing tribute to Kenyatta and asked Kenyans to rally behind him for the country to continue rising in development.

“We want to assure you as our leader that we will stand with you in what you started in 2013 to bring Kenyans together and stop politics of tribalism and hatred,” he said.

It is through his leadership, Ruto noted, that the country has continued to record positive changes saying he is proud to be his deputy.

He said the country cannot move forward unless the vice is completely eradicated. He highlighted the need for Kenyans to stand together to raise the county to higher levels.

Party says the reporting was a 'blatant lie' aimed at misleading the public.
News
2 years ago