According to the legislators, there is no justification for the importation of maize in the country and the argument of impending shortage is a lie.

• MPs expected to tell Kiunjuri off over push for maize imports.

• Millers are on the verge of running out of maize as disputes continue between the government. 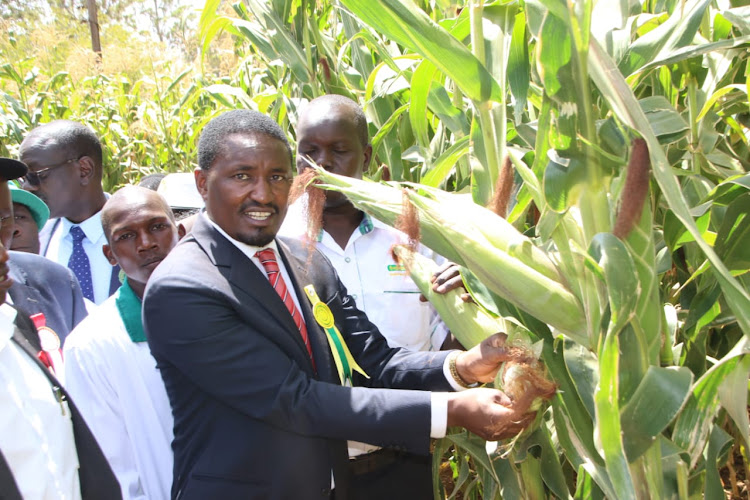 The debate on whether the country should import maize or not escalated yesterday with, MPs demanding the government shelves plans on the matter.

Agriculture CS Mwangi Kiunjuri is set to appear before Parliament today to explain why he is pushing for maize importation when all indications suggest the country has enough stock.

The MPs claim Kiunjuri’s importation plans are suspect and are meant to enrich maize cartels at the expense of millions of farmers across the country.

Millers are on the verge of running out of maize as the dispute between the ministry, the Strategic Food Reserve, millers and the National Cereals and Produce Board persists.

About 50 of the country’s 200 millers have closed because of the maize shortage, according to the United Grain Millers Association.

The shortage has increased prices for a bag of maize and also added to flour and feed costs.

Kenya is currently facing a shortfall in domestic maize supply forcing it to import the commodity which is the dominant staple food for the majority of Kenyans.

The country consumes between 1.5 and 1.7 million bags of maize in a month.

Both the Strategic Food Reserve Trust Fund and opposition chief Raila Odinga have warned against the importation of the grain as the country is only weeks away from a bountiful harvest.

The legislators say that there is no justification for the imports and that the argument of an impending shortage is a lie.

Through the agriculture committee, the MPs told Mwangi Kiunjuri to drop the push because the hard times are over.

The Strategic Food Reserve board advised the government to import four to six million bags.
News
7 months ago

The committee cited statistics from the Strategic Grain Reserve which shows the country can do without the maize importation.

Committee chairman Adan Haji (Mandera South) said the opening stock at the NCPB in May before the government began to sell to millers was 4.2 million bags of maize.

Of this,  1.7 million bags were sanctioned to be sold to millers in order to reduce the price of maize flour on the shelves.

“That leaves 2.5 million bags which are in stock, there is a cabinet memo that is awaiting approval of a further 1.7 million to be released to millers this month, which means in July the millers are covered, there is no reason to see prices hiked,” Haji said.

He added, “We are left with August, and if you look at the ministry's own statistics, we are talking of 1.5 to 1.7 million bags per month required by all millers in the country, we just need another 1.7 million bags to cover us in August. We are now waiting for harvests.”

“Someone somewhere is raising alarm for no reason. This is a clever way to invite cartels and businesspeople to import maize,” Wangwe who is also the vice-chair of the committee said.

Mutua questioned the necessity of the importing expensive maize when local farmers were offered a lower price.

“Why does he want to import maize at Sh5,000 and they cannot buy local maize at Sh3,200? We know it is cartels who want to do the importation,” Mutua said.

The MPs are expected to tell Kiujuri off of the importation plans.

“In South, Rift maize is starting to get ready, we want to ask the CS to stop the process of importation of maize,” Tuitoek said.

The MPs’ views are in line with the position taken by Strategic Food Reserve Trust Fund – a state agency domiciled in Kiunjuri’s docket – which has differed with the CS over the matter.

The Fund’s chairperson Noah Wekesa has maintained that the maize in the reserves, together with those from expected harvests will be enough for the country.

To import maize or not? State not sure

Kiunjuri on Thursday told Wekesa off insisting the ministry's position was final.

The CS said the 12.5 million bags to be brought in would cushion the country from the impending shortage.

The SFR is, however, the only body mandated by law to advise the government on food reserves, store and sell food commodities.

The agency is also tasked with maintaining adequate strategic food reserves in physical stock or cash equivalent at any one given time.

ODM leader Raila Odinga cast his lot with Wekesa, saying the country should guard against cartels out to benefit from the plans.

The former PM told Kiunjuri to mop up the produce currently lying with farmers in various parts of the country before making any imports.

“The strategic Food Reserve Trust Fund has confirmed that the country has at least 2,760,000 which is sufficient to take us up to mid-August, going by the average 1.5 million bags per month, ahead of new harvest to begin by September,” Raila said through his spokesperson Dennis Onyango last week.

Raila further demanded that investigative agencies probe the incessant push for routine importation and bring all culprits to book.

But in a quick rejoinder, Kiunjuri fired back accusing the ODM leader of misleading Kenyans on the maize importation saga.

“If you deal with gold, do not imagine maize is gold. Some of the people spreading propaganda are involved in selling fake gold,” Kiunjuri said at Kahira-ini Catholic Church in Nyeri County.