• Health teams will move from house to house and also will be in hospitals, msques, churches, transit areas. 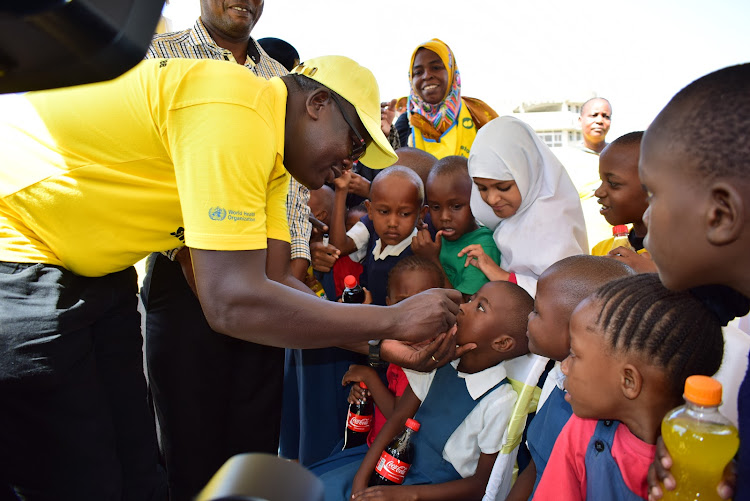 Kenya on Friday kicked off a five-day national polio vaccine campaign targeting 11 counties considered to be at high risk for the deadly virus.

The campaign, which was launched at Ronald Ngala Primary School in Mombasa town, targets 2.6 million children below the age of five.

In Nairobi, it was postponed because the vaccine shipment was delayed but will start around July 20.

Gondi said health teams will be moving from house to house, others will be stationed in hospitals, schools, churches, madrassas and others in transit areas.

UN representative Dr Iheoma Onuekwesi from Nigeria said the vaccine is important in helping to achieve zero cases of polio in Kenya and in Africa at large.

For the last six years, Kenya has achieved zero cases of polio.

The last imported wild polio virus was imported into Kenya on July 14, 2013.

However, last year in Nairobi’s Eastleigh area polio virus was detected in a sewage sample during routine monitoring.

This prompted the national government to administer vaccination sin 12 counties.

The national government has also launched a  five-year Polio Endgame Strategy 2019-2023. It spells out how to wipe out polio virus from its last remaining reservoirs.

Nominated Senator Harold Kipchumba, who is a polio survivor and national anti-polio champion, said effort and will are lacking.

“As a country, we are about to achieve a polio-free status, but we are seeing laxity in government to tackle the disease. We need to work more to fight this disease and many other preventable diseases. We do not want to see our children suffering from preventable infections,” he said.

“We have enlightened our women in Mombasa and we are optimistic we shall achieve our target. Mombasa is at 89.5 per cent reach in term of polio vaccine,” she said.

Polio vaccination to be rolled out on Saturday