Apart from uplifting Kenyans through corporate social responsibility programmes, Collymore was credited for popularising jazz music in the country

President Uhuru Kenyatta said even as Bob's life is celebrated, there is still so much pain in losing somebody everyone loved so much. 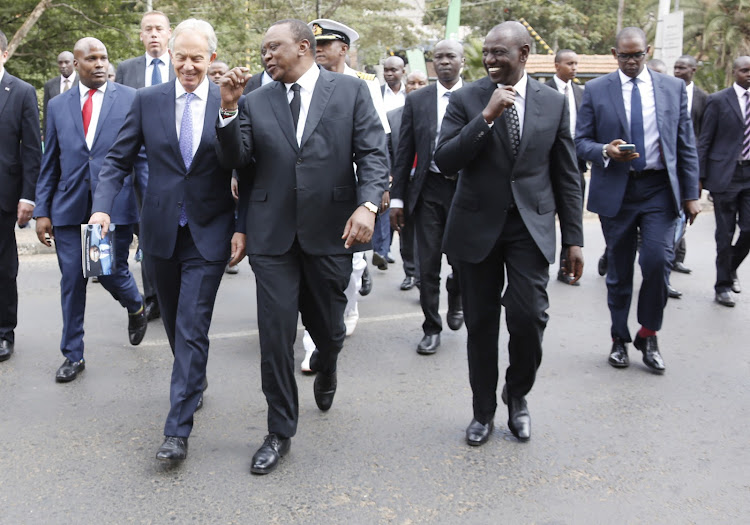 “Bob loved Kenya as his own country. He loved Safaricom as his own company. We have lost part of our soul,” said President Uhuru Kenyatta when he joined family, friends and the country's top business executives at a memorial service held at the All Saints Cathedral (ACK) in Nairobi.

“Even as we celebrate his life, there is still so much pain in losing somebody we loved so much,” the President said.

Collymore died on Monday from cancer of the blood and was cremated on Tuesday.

The President recalled how about three weeks ago someone kept trying to call him while he was on an official trip in Canada.

He called back and found out that it was Collymore who was looking for him.

“I asked him why he was calling me at 3am and he said he was not aware I was abroad. He then said he wanted to see me urgently,” Uhuru said.

Upon his return, the President visited Collymore at his home to spend an afternoon with him.

He told me he was going to break the promise of staying at Safaricom for one more year because he was dying. Collymore told me that he had only about two weeks to live

The President said Collymore, even in death, kept asking him to focus and strengthen the fight against corruption and to take care of Safaricom, his wife Wambui and kids.

Apart from uplifting Kenyans through corporate social responsibility programmes, Collymore, 61, was credited for popularising jazz music in the country.

Upon his arrival in 2010, Collymore took over and transformed Safaricom into the second most profitable company in the continent.

In doing so, the Guyana-born British-Kenyan citizen put people at the centre of his transformation agenda.

He connected with millions of Kenyans through arts and those who eulogised him yesterday passionately spoke of a man who changed the lives of many.

President visited Collymore at his house to get brief on urgent matter.
News
2 years ago

Former Vice Presidents Moody Awori, Kalonzo Musyoka,  and Musalia Mudavadi attended the service alongside a host of other political leaders.

Deputy President William Ruto said Collymore was a courageous leader, in a class of his own, who had become a great inspiration to many Kenyans.

“The way he did his things was a big inspiration to many Kenyans. His legacy should be carried to the future,” the DP said.

Business community representative Patrick Quarcoo eulogised Collymore as a hero who was more of a friend than a leader.

“Collymore made Safaricom an intimate and inseparable part of our life since he made it easier for customers to access opportunities, share their feelings, buy goods and services, transact business and pay salaries through Safaricom,” Quarcoo said.

Ng’ang’a said Collymore transformed Safaricom's operations from a telecommunications firm to a company that provides a platform for solutions in agriculture, health and education.

“He came up with the idea of M-Pesa Kadogo saying that M-Pesa is not a success because of the people who carry out large transactions but because of those who transact the little amounts,” Ng’ang’a said.

This idea was for the purpose of creating equal access to the opportunities provided by modern necessities such as mobile connectivity and data, he said.

Jamii Telecom chairman Joshua Chepkwony who represented the telco community remembered Collymore as an icon who mobilised all stakeholders to unite in problem-solving to transform Kenya.

“He was a founder of Kenyans for Kenyans which helped in support the famine-afflicted in the country,” Chepkwony said.

He also noted that Collymore was the founding trustee of the National Road Safety Trust formed to deal with the problem of road carnage.

Poem that made Michael Joseph break down at Collymore's service

The poem was to be read in the memorial service of whoever died first.
News
2 years ago

The former Safaricom CEO Michael Joseph lauded Collymore as the strongest man ever as he fought cancer with humour.

Former British Prime Minister Tony Blair said that Bob was a great human being and a perfect example of how a good life can be led.

“Bob was a great leader because he was unafraid to take up positions, unafraid to stand up for what he believed in and because he got things done and countered challenges positively,” Blair said.

Politician Peter Kenneth recalled how Collymore had formed the ‘Boys club’ which he led with a passion.

“Last Tuesday, we met and we were taken aback when he told us that he had only two weeks to live. He gave us blended whiskey he had reserved for the special occasion. Even those who don't drink were asked to take it,” he said.

He said most of the “boys” had travelled abroad at the time of his death.

“I was in the DRC while Oigara was in New York. We all had to return immediately,” Kenneth said.

Pay up, Uhuru tells Peter Kenneth and friends after they took Collymore's 'special' gift to him

Collymore gave members of the Boys Club gift that had been reserved for Uhuru.
News
2 years ago
by By ALLAN KISIA
News
05 July 2019 - 06:00