Government to take over costs of TB drugs for Sh1 billion

Sh660 million is for the GeneXpert - used to test for TB - and Sh340 million will be used to acquire all first-line drugs.

•The costs are of all first-line medicines, microscopy tests and for the GeneXpert cartridges.

• Previously, these costs were borne by donors, particularly the Global Fund, but the government has been progressively increasing its control of Kenya's healthcare system. 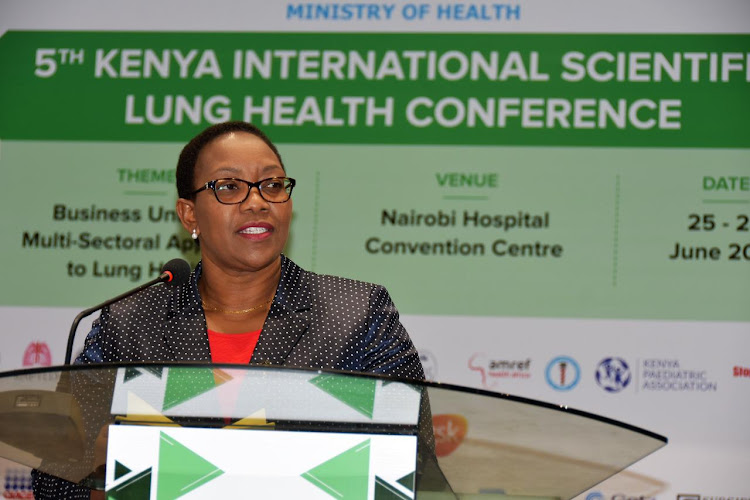 The government has taken over the costs of buying TB drugs that were previously borne by donors.

This will include the cost of all first-line medicines, microscopy tests and for the GeneXpert cartridges.

In total, the government has allocated Sh1 billion for 2019-20, which includes Sh660 million for the GeneXpert - used to test for TB - and Sh340 million for all first-line drugs.

The announcement was made by Health Cabinet Secretary Sicily Kariuki during the official opening of the international scientific lung health conference held at the Nairobi Hospital on Tuesday.

“Kenya has been on the forefront in adopting innovative approaches such as GeneXpert, the first diagnostic test for all TB patients and its drug-resistant variant,” the CS said.

Previously, the Global Fund bore most of the costs, but the government has been progressively increasing its control of Kenya's healthcare system.

“We have made advanced plans to roll out Multiple Drug Resistant (MDR) TB injection free regimen to mitigate against the side effects associated with the current injectable regimen,” the CS added.

She said the ministry also aims to reduce the burden of paediatric TB by intensifying efforts to find the “missing” children.

Data from the ministry shows so far there has been a 31 per cent increase in the reduction of missed cases for this age group.

To strengthen gains made in the group, the ministry rolled out child-friendly TB medicines in October 2016 and plans to adopt the paediatric friendly drug-resistant TB medicines from the year 2020.

CS Kariuki said that despite the political goodwill and the progress made in TB prevention, treatment and care, the disease still ranks as the fourth leading cause of death in Kenya while drug-resistant TB is still a major health concern due to missed TB cases.

She said smoking was the largest contributor to COPD.

“The annual tobacco-related deaths are projected to increase to 8 million globally by the year 2030, accounting for 10 per cent of all deaths,” she said.

Kenya is among countries with solid anti-smoking legislations adopted to protect and educate the public, but the vice remains rampant.

It is estimated that the economic cost of smoking in Kenya is Sh3 billion annually.

On the other hand, it is estimated that more than 300 million individuals in the world are affected by Asthma with an estimated 346,000 mortalities every year as at 2018.

Several groups have demanded that the government increases its funding for vaccines and treatment of diseases like HIV, TB and malaria.Currently, ...
News
3 years ago