• Locals petitioned the National Assembly to help them recover the property, saying the land in question is ancestral. 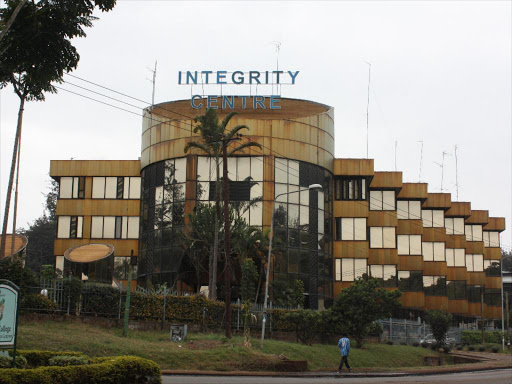 A file photo of EACC headquarters in Nairobi.

The Ethics and Anti-Corruption Commission has been put on the spot over a cover-up in the investigations into claims of land grabbing in Magarini, Kilifi.

A parliamentary committee has accused the agency of shielding big names linked to the hiving-off and sale of Agricultural Development Corporation parcel in Sabaki. The EACC had been investigating for nearly 10 years.

The Land committee, chaired by Rachel Nyamai, is probing how the 912 acres were hived off and sold to private developers. Residents stake a claim to the land. It was held in trust by the ADC.

The MPs have given the anti-graft agency until June 27 to furnish it with a report on its investigations.

The buyers are said to have bought retained or resold the parcels to other unsuspecting buyers.

The cover-up claim was cited after EACC officers, led by vice chairperson Sophia Lepuchirit and director of investigations Lucy Kinuthia, told MPs that the case is not among those prioritised by the anti-graft agency.

“I'm being honest with you. This matter is not in the handover notes. I heard it for the first time yesterday,” Lepuchirit said, eliciting the rage of MPs from the affected areas.

Magarini MP Michael Kingi read mischief, saying there could have been a deliberate attempt not to investigate the case.

“None of the commission’s reports have spoken of this matter as an ongoing investigation or a closed file. The truth is that the EACC abandoned this because of the names being mentioned here,” he said.

For her part, Nyamai said the committee would indict the EACC should it fail to come clean about the concerns that it is culpable in the alleged cover-up.

“This matter has been ongoing for almost 10 years. How much more time do you need? And is it a live matter? Was it part of the handover notes by the former commissioners?” Nyamai said.

“Surely, nine years is a long time. We must mind the petitioners. The titles should be a nullity from day one. It was said here that EACC was the problem. You (EACC) better get out of this problem since this committee believes you are the problem.”

A document tabled before the committee showed the parcels were sold after ADC ran out of cash to restock the Galana Ranch, which was the source of animals for ADC’s Kiswani Butchery in the 1980s.

“It was with this in mind that I went to State House on Saturday, January 15, 1994, to see H.E the President where I presented the case and permission was granted to sell the land at the possible current market price,” the note reads.

Other legislators said Sabaki residents would not have been disinherited of their property should the investigative agencies have taken up the fraud claims seriously.

“We may need to recommend that the EACC abdicated its role in this case. The people of Sabaki are crying. One of the biggest hotels in Malindi has been built on the land. Let the DPP and the DCI investigate officers involved in this matter,” Kingi said.

Post a comment
WATCH: The latest videos from the Star
by MOSES ODHIAMBO Journalist and Political Writer
News
17 June 2019 - 00:00
Read The E-Paper