Old man says he was kidnapped and an illegal oath forcefully administered.

• The 80-year-old says even shopkeepers have refused to sell him food.

• His family blame him for all the bad things that have happened to them. 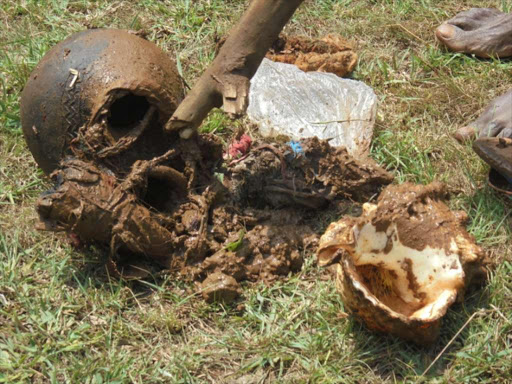 Some witchcraft paraphernalia discovered at Nabuganda in Samia.Photo Gilbert Ochieng

At 80, Syolo Muthama Ndambuki should be enjoying his sunset years surrounded by a loving family.

But Ndambuki's is a life of misery and solitude after his family abandoned him. He has gone to court for help and protection.

His troubles, he says in court papers, started in 2005 at Kako village when some members of his family kidnapped, blindfolded and took him to a Kitui traditional doctor who forcefully administered an illegal oath "to reduce the potency of my witchcraft".

Thereafter his children abandoned him, condemning him to a life of solitude. His home, which was once filled with laughter and joy, is now but deserted.

His family accuses him of practising witchcraft. Shopkeepers will not sell him food.

Ndambuki is accused of bringing misfortunes to the family, including wrongly burying a wrong body in the family burial ground.

And, due to his advanced age, he is unable to manage himself – he needs the attention of the family.

Only one family member has maintained contact with him. And that is likely to end because of constant pressure to sever links with him.

In 2005 six relatives convened a routine meeting to discuss family issues. He learnt that the meeting, in which he was invited, was to discuss "his unbecoming behaviour as he had been causing evil".

He recalled that he was seized by rowdy youth, tied with ropes and gagged with a leso.  He was then loaded on a vehicle and driven to Kitui where he was forced to take an illegal oath called Ngata ostensibly to neutralise the potency of his witchcraft.

"What would follow after this rather unfortunate episode was a very humiliating moment for me to date because every one deserted me and I have been shunned by everyone including my very own children who suddenly changed and started treating me as a wizard and stopped coming home," Ndambuki says.

He complains that he is never invited to community events such as burials and weddings.

The old man says that making him take an illegal oath was a breach of his rights and freedoms.

"Ever since I have been living a life of despair and distress – almost running mad – and I implore this honourable court to protect and declare my rights and freedoms."

Ndambuki informed the court that he reported the matter to the Director of Criminal Investigations but nothing happened.

Leaders in Kitui have expressed alarm over the surge in rape cases.
Counties
3 years ago