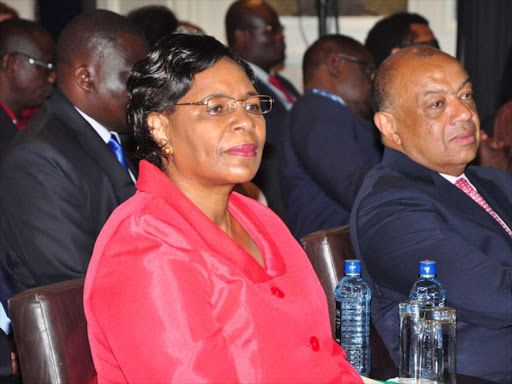 Public Service, Youth and Gender Affairs CS Margaret Kobia and AECF board chairman Paul Boateng at a past event in Nairobi
Image: FILE

The ministers signed a pact in Mombasa after a two-day conference that brought together anti-FGM crusaders and experts from Somalia, Ethiopia, Uganda, Tanzania and Kenya.

Participants discussed ways of tackling the emerging trend of cross-border FGM, where communities advancing the practice cross national borders to seek or carry out FGM in neighbouring countries.

A recent study by Unicef showed some of the reasons for the trend ranged from evading the law back home, affordability, availability of circumcisers to preferred quality or outcome of the mutilation.

Nothing kills as silence. We want male champions to join us in fighting this war. This cutting is purportedly meant to please men. They should speak out and explain that, in fact, cutting erodes the pleasure and is outlawed

The study further indicated that Kenya is the leading destination of cross-border FGM.

The declaration commits the five governments to work together to end FGM within the region by 2030.

Kobia said Kenyan authorities are worried that the country is a soft spot for carrying out cross-border FGM. She said the government will embolden its resolve and tactics to stamp out the practice.

Kobia said the recommendations derived from the conference will be vital in ending the practice and she will ensure their full implementation.

"It is now time to seal the gaps and translate our commitments to results. I urge each of the member states within the region to take specific deliberate measures to implement the adopted action plan," she said.

Her Ugandan counterpart called on male leaders to speak out more and persuasively against gender-based violence and FGM.

"Nothing kills as silence. We want male champions to join us in fighting this war. This cutting is purportedly meant to please men. They should speak out and explain that, in fact, cutting erodes the pleasure and is outlawed,"  Mutuuzo said.

She said the fight against FGM is not merely a gender issue but a collective struggle to restore sanity in society.

UNFPA Kenya representative Ademola Olajide said the five countries account for almost a quarter of the global number of women and girls who have undergone FGM, which he described as a significant burden to carry for developing economies.

Some residents suggest government should allow safe FGM for women above 18 years
Counties
3 years ago
Post a comment
WATCH: The latest videos from the Star
by EUGENE OMILO
News
18 April 2019 - 00:00
Read The E-Paper