• Ruto called for cooperation between Kenya and Cuba excellent, notes work on malaria and HIV-AIds vaccines 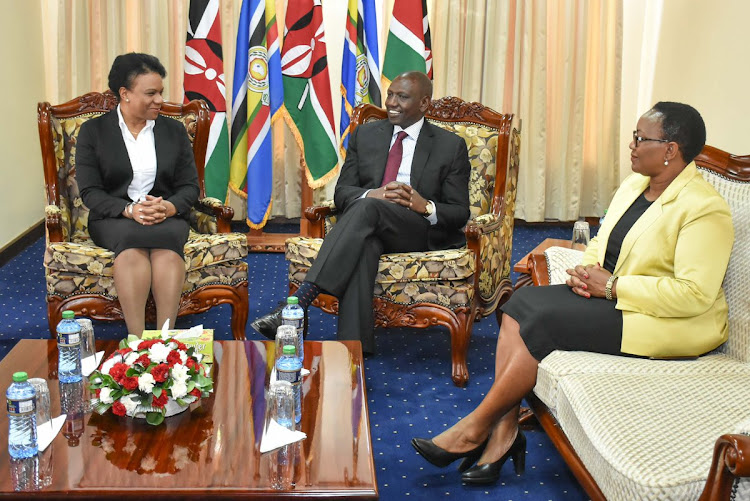 Deputy President William Ruto chats with Ines Maria Chapman, the Vice President of the Cuban Council of State and of Ministers as Health CS Sicily Kariuki looks on at his Karen office on Tuesday, April 2, 2019.
Image: DPPS

Deputy President William Ruto on Tuesday dismissed reports that he refused to preside over the launch of Huduma Namba in Kakamega county.

He had met a Cuban delegation led by the Vice President of the Councils of State Ines María Chapman Waugh.

“This (the meeting at his office) is a State function and therefore I could not go (to Kakamega),” Ruto told a press briefing.

However, his no-show is expected to heighten talk of a division between President Uhuru Kenyatta and himself.

Kenya and Cuba are deepening strategic partnership and collaboration in areas of mutual interest, especially health, education and trade through signing of MoUs. pic.twitter.com/q24obdD3zN

The DP said the death of doctor Hamisi Ali Juma in Cuba was an isolated and the Health Ministry will brief the country on Wednesday on the circumstances leading to his death.

Ruto said Kenya would continue to cooperate with Cuba in expanding the health sector. Universal healthcare is part of the Big Four agenda.

He said Kenya and Cuba would work together to expand the training of doctors, nurses and community health workers.

“You are all aware that 100 Cuban doctors are helping our people in various parts of the country, while our 50 doctors are doing postgraduate courses in Cuba,” the Deputy President said.

We have had important bilateral discussions with the delegation from Cuba on important issues in the fields of health, agriculture, fisheries, trade, human resource management and water among other areas.

He said Cuban doctors have so far attended to more than 300,000 people since they arrived in Kenya in June last year. He said Kenya was learning from the Caribbean nation in preventive and curative health.

Kenya and Cuba have agreed to expedite malaria vector control, he said.

“The malaria control programme will soon be rolled out once the Attorney General’s office and the Treasury finalise some few issues,” Ruto said.

He added that Cuba has excelled in agriculture, saying Kenya will borrow valuable lessons to aid in its own food security.

Cuba is also working with the Kenya Medical Research Institute to come up with vaccines for hepatitis B and, HIV/Aids and to develop foods for diabetics, the Deputy President said.

Waugh praised the cordial relations between the two countries, saying they would help improve the lives of people in the two nations.

“We will continue working together to come up anti-malaria vaccines, Ms Waugh said.

She said Cuba was impressed with the way M-Pesa is transforming the lives of Kenyans. She said Cuba would explore ways to replicating the same economic venture in her country.