• In the long court battle, opponents said such an association was against Kenyan culture 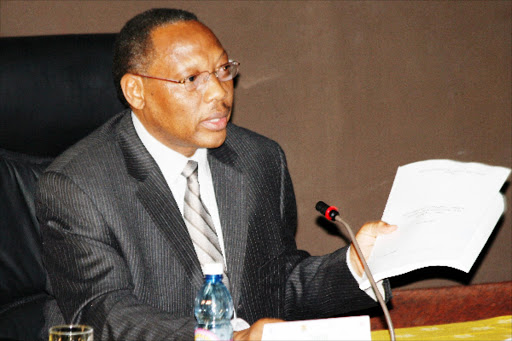 “Let any one of you who is without sin be the first to throw a stone."

Those were the words of Court of Appeal Judge Philip Waki on Friday after he upheld a lower court decision allowing members of the gay community to formally register their organisation.

Waki cited the Book of John 8:7 in which Jesus responded to Pharisees after they caught an adulteress.

The judge dismissed the appeal by NGO Coordination Board and he would not be the first to cast a stone and injure lesbian, gay, bisexual and transgender (LGBT) people.

"I suppose adultery is still a serious moral issue in our country. Let it be known that the LGBT community has a right to freedom of association and the Criminal Procedure Code does not criminalise those who want to form such groups," Waki said.

He said the issue of the LGBT community is rarely discussed in public but it is undoubtedly an emotive issue.

"The reality is this that group does exits and we can no longer deny that. However, the issue before the court is not about family values or morals. But it boils down to consideration of (Constitution) Article 27, which was involved in the interpretation of the LGBT case," Waki said.

Article 27 states that the right to equality and non-discrimination applies to “every person”.

At the heart of the appeal is whether the NGO Coordination Board should be compelled to register an NGO to fight for the rights of gay people.

In April 2015, the High Court allowed the registration of the LGBT group.  According to the court documents, lawyer Eric Gitari had approached the NGO Coordination Board seeking to register their NGO.

The core objectives of the proposed organisations, Gitari said, were the advancement of human rights. Specifically, the proposed NGO would seek to address the violence and human rights abuses suffered by gay, lesbian and other sexual minorities.

The Board, however, rejected his application on the basis that the people whose rights the proposed NGO will seek to protect are gay and lesbian persons. Gitari then petitioned the High Court which allowed him to register the proposed NGO.

In the decision, Justices Isaac Lenaola, Mumbi Ngugi and George Odunga declared that Gitari was entitled to form an association.

"Our understanding of the objectives of the proposed NGO is the protection of persons whose sexual orientation is gay or lesbian, as well as persons who are transgender or intersex, from discrimination and other violation of their rights. It is not for the promotion of the sexual acts 'against the order of nature' prohibited by the Penal Code," said the bench.

Yesterday, two judges dissented on grounds that the High Court had no jurisdiction to entertain Gitari's petition.

However, Justice Daniel Musinga and Roselyn Nambuye agreed with the Non-Governmental Organisations Coordination Board that Gitari's proposed NGO is 'hell-bent' on destroying the cultural values of Kenyans, and must therefore not be allowed. Musinga said by proposing registration of the NGO ould be promoting prohibited acts.

But Justices Waki, Asike Makhandia and Martha Koome affirmed the decision of the High Court and said no human beings should not be denied their fundamental rights because of how they choose to live their life.

Justice Makhandia said the Board by refusing to accept names for proposed NGO's, violated Gitari's right to freedom.

"In a society that is diverse as Kenya there is need for tolerance and in any democratic society there will always be a marginalised group. This appeal, therefore, lacks merit and is dismissed," he said.

Makhandia held that the decision given by High court was not about sexual orientation and the Board violated Gitari's right to freedom by refusing to accept the names for proposed NGO,

Justice Koome on the other hand  said she finds no legal justification to disagree with the lower courts findings.

The institution of marriage she said cannot be threatened by an association of the LGBT, especially now when there are many people who enter it and leave.

"the activities of the association must however be in accordance with the law. But its arbitrary to attack the LGBT group by seeing them as those bent on demeaning the marriage institution and our culture," she said.

Koome said allowing the appeal by the Board will be stereotyping people. "If some people are sinners, God will deal with them. No one can Judge them," she held.

Post a comment
WATCH: The latest videos from the Star
by SUSAN MUHINDI Court Reporter
News
23 March 2019 - 07:00
Read The E-Paper