Is it time for radical surgery over petitions against judges?

• LSK proposes that JSC be comprised of retired judges, non-lawyers and human resource practitioners to enhance disciplinary mechanism in the commission.

• Judges are being investigated over corruption, bribery, interfering with the course of justice, insubordination, breach of code of conduct and gross misconduct. 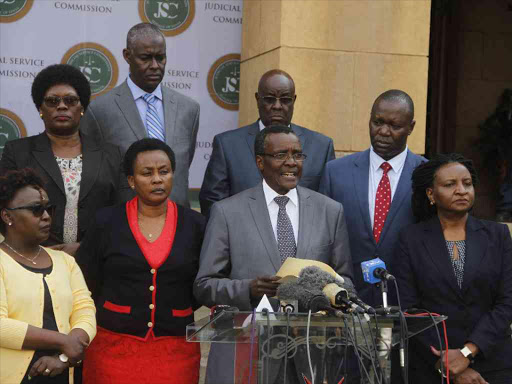 Members of the JSC led by Chief Justice David Maraga during a past press conference.
Image: FILE

The scores of petitions filed against judges with the powerful Judicial Service Commission have lifted the lid on the endemic rot bedevilling the Judiciary.

Two key questions are pertinent: Should the country adopt another radical surgery? Does the Judicial Service Commission have the will and capacity to crack the whip on errant judicial officers?

Since Independence, the Judiciary has been accused of endemic corruption and past efforts to clean the bench have largely been futile.

With recent revelations that the JSC is probing up to 30 judges over various allegations, then Kenya’s push to weed out graft from the corridors of justice remains a big challenge.

According to the JSC, the judges are being investigated over among others corruption and bribery, interfering with the course of justice, insubordination, breach of code of conduct and work ethics and gross misconduct.

The commission says it has dismissed five magistrates in the last two months for issuing illegal orders that led to the demolition of people’s houses and having fat bank accounts with unexplained sources of wealth.

In the middle of the graft claims against these judges, the Law Society of Kenya is advancing far-reaching proposals that should alter the composition of the JSC. LSK wants the representation of judicial officers at the JSC scrapped in a radical move aimed at sealing loopholes in disciplining rogue judges and magistrates.

The lawyers association proposes that JSC should be comprised of a blend of retired judges, non-lawyers and human resource practitioners to enhance the disciplinary mechanism in the commission.

On Thursday, LSK president Allen Gichuhi proposed that members of the bench be barred from sitting in the influential JSC that hires, fires and remunerates judges and magistrates.

He said it was risky to expect objectivity from the commission when dealing with judicial officers as commissioners tend to side with their fellow judges and magistrates.

We tried it (radical surgery) but it failed. We then came up with the idea of vetting judges in the Constitution and to a greater extent that worked. Except it does not appear to have solved the issue of corruption

“At times what happens is that one tends to have mercy on fellow judicial officers, but when you have an independent JSC, it may give a different perspective,” Gichuhi said.

This, he said, would work as opposed to attempt another radical surgery. The revolutionary push, Gichuhi said, would be the much-needed remedy in firmly dealing with errant members of the bench whose conduct risks ruining the Judiciary’s credentials.

“Within the JSC, perhaps what may be done in the future is to amend the law so that we don’t have a JSC comprised of many judicial officers to deal with discipline matters,” the LSK president told the Star.

When questioned whether the upsurge of complaints against judges was a tip of the iceberg that would sink the bench, Gichuhi said the cases are insignificant compared to the number of judicial officers.

“They (complaints) would affect the administration of justice if there would be widespread endemic complaints.

But right now, we should not condemn the entire system just because a few complaints have been raised against some judicial officers,” he said. 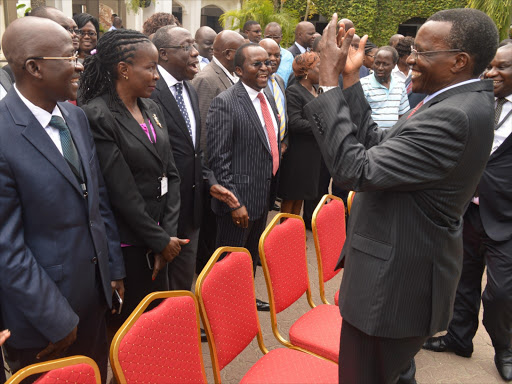 CJ David Maraga with judges during a Judges’ Annual Colloquium at The Whitesands Hotel in Mombasa.
Image: JOHN CHESOLI

Senior Counsel Otiende Amollo acknowledges that graft disclosures threaten the country’s judiciary. He was quick not to prescribe radical surgery.

The Rarieda MP, however, warned against attempts to rush another radical surgery, saying that would be an exercise in futility. “We did that just a few years ago, it would be too soon,” he said.

Regarding petitions against judges accused of gross misconduct and corruption, Amollo admitted that some complaints could be weighty but called on the JSC to deal with the issues raised robustly.

“What would be wrong is to bring completely malicious complaints that lack any basis at all. That would be maliciously tainting names of judges,” Amollo said.

LSK vice-president Harriette Chiggai warned against another radical surgery, saying the JSC has the capacity and the m Harriette Chiggaiandate under the Constitution to deal with complaints against judicial officers.

“Radical surgery might not have any impact since the disciplinary element of the Judiciary is now under JSC,” she said.

JUDGES AND MAGISTRATES VETTING BOARD

It was established to vet the suitability of all judges and magistrates prior to the promulgation of the 2010 Constitution.

The Sharad Rao-led board was to determine the judges' and magistrates’ suitability to continue serving in accordance with the values and principles set out in Article 10 and 159 of the 2010 Constitution.

The board sent packing some judicial officers found unsuitable, while some got their way back through the courts.

The lawyer said the increase in the number of complaints against the bench at the JSC is an indication that Kenyans are more informed and more courageous to report cases of unprofessional conduct.

“JSC is the body tasked to review and discipline members of the Judiciary. It is, therefore, expected that they shall do all that is required to ensure they return a sober and a more trusted Judiciary.”

Chiggai called on all state actors to work hard to stamp out graft within the corridors of justice.

“Recently the CJ has come out strongly on the fight against corruption within the judicial system and the same cannot be ignored,” she said.

Nominated Jubilee senator Isaac Mwaura poked holes into the JSC Act, saying it was tailored to suit lawyers at the expense of public interest.

Mwaura suggested that the law be amended to bar presiding lawyers and magistrates from sitting in the JSC unless they first resign.

“There is a serious challenge in the way the JSC is crafted. There is no way you can have practising lawyers sitting in the JSC and then continue to appear before judges and magistrates whom they have employed,” he told the Star.

He said the JSC representation“,” he told the Star on Thursday. should include more people from outside the legal fraternity to avoid conflict of interest and breach of trust.

“But if we were to reform the Constitution, then JSC should be restructured to be more representative and independent of the same actors within the Judiciary,” he added.

He proposed a South African model in which Parliament is also represented in the JSC.

He said the 2003 radical surgery was not successful because the endemic problem is about character.

The first effort at a systematic clean-up of the judiciary was in 2003 following the election of Mwai Kibaki as President on an anti-corruption platform through wide-ranging reforms.

The 2003 clean-up saw half the judges resign or face a tribunal and a third of the magistrates sent home.

Some judges and lawyers criticised the 2003 purge for not giving the affected judges and magistrates a chance to present their side of the story before the allegations against them were made public.

The JSC has since January this year received 69 complaints against judges.

After consideration, the commission admitted only 13 of the 69 petitions and scheduled them for hearing.

Eighteen others are at an advanced stage of consideration, while the rest were dismissed due to lack of merit.

CJ happy with changes in courts

Chief Justice David Maraga has said the digitisation project in the commercial courts division will help fight corruption.The CJ said he is happy to ...
News
3 years ago
by JAMES MBAKA
News
16 March 2019 - 07:00