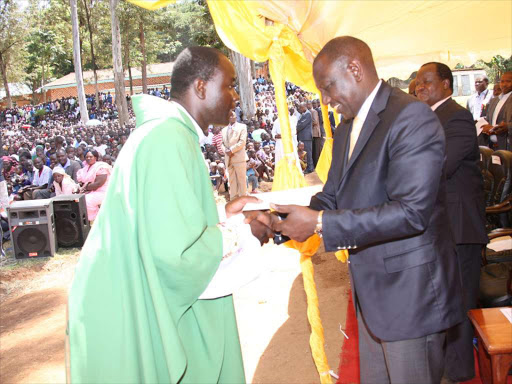 The rejected car gift has sparked off another round of acrimony between Deputy President William Ruto and ODM boss Raila Odinga.

Even before the dust settles on their exchange over the Sh21bn dam scandal, they are at it again, this time a car gift that Ruto donated to Kisumu Catholic Archbishop Philip Anyolo.

Raila on Saturday, while in Siaya County, revealed the church rejected the vehicle in January because it was bought with "dirty money”.

Raila claimed that the Pope insisted that the brand new Mitsubishi Pajero be returned to Ruto.

But early morning before attending church service in Machakos county, Ruto told off Raila accusing him of lying over the car gift.

The furious DP lashed at Raila saying that he (Raila) was a 'master of deceit who always spewed desperate lies'.

"...the car gift was bought by Christian leaders including UK (Uhuru Kenyatta) and myself at the request of the chair of Catholic MPs. Understandably, empowering the church offends magicians and the evil spirits they worship. Shetani ashindwe," Ruto said.

A church leader, who was in the installation committee of new Kisumu Metropolitan Diocese Archbishop Philip Anyolo, confirmed that a Mitsubishi Pajero was donated.

The official who asked not to be named said that the vehicle was driven to Ukweli pastoral centre where it has been packed since it was donated.

He said the bishop has never used the vehicle as Christians bought for him a Toyota V8 valued at Sh5million.

"There has been a complaint from church members that they should not accept a gift whose source is unclear. This has seen a lot of heat in the church," he said.

He added that by the time Ruto's gift arrived, Anyolo had been given a Toyota Land Cruiser V8 by his Catholic believers on the day he was installed.

Speaking at St Martin’s Kitwii Catholic Church grounds in Kangundo, Machakos County during the Sunday service, Ruto assured churches that nothing would stop leaders from taking part in the development of the scriptures.

He said those who don’t believe in God would not stop others from participating in the development of churches so as to facilitate the spread of the Gospel to the masses.

“Those who believe in witchcraft, the magicians and those who worship evil spirits are offended and do not like what we are doing in churches. We are telling them we are not going to stop participating in the development of churches,” Ruto said.

They dismissed claims by Odinga that the Pope had has insisted that the vehicle that was presented by the Deputy President to Kisumu Catholic Archbishop Philip Anyolo be returned.

“Odinga should stop pretending to be the one speaking on behalf of the Catholic Church. He should stop spreading lies that the Pope has asked that the vehicle be returned. This is untrue,” Musyoka he said.

Wamacukuru wondered why the Opposition leader was bothered about Ruto’s move to participate in church activities.

“Odinga doesn’t go to church, but instead he always attends funerals. He should leave the Deputy President alone,” Wamacukuru said.

Gachagua and Mr Mbai said it is Church leaders who invite the Deputy President to help in the development activities..

“It is Christians who invite the Deputy President to the churches. Why is Raila Odinga worried on issues that do not concern him,” Gachagua said.

Mbai said the Catholic Church has its communication channels from the Pope and its wrong for Raila to mislead Kenyans that the Pope has insisted that the vehicle donated to Kisumu Diocese be returned.

The firebrand first time legislator said it was unfair to link the DP to to corruption with the aim of tainting his name ahead of 2022.

"We know very well that Raila opted to support the jubilee administration not for anything else other than to scheme on how to stop the DP from becoming the President. But let him and his cronies know that the God we serve is bigger than him, they will be ashamed," he said.

"If indeed DP was stealing as these people want us to believe, why have they not presented their evidence to Directorate of Criminal Investigations? They can also do private prosecutions. Those people should stop this spree of mudslinging others let them face the DP on the ballot not sponsoring propaganda," he added.

Machakos Town MP Victor Munyaka said the church plays a critical role in the society when it is empowered, "those who do not believe in God should stop politicizing".

He thanked the Deputy President from supporting and standing with the church across the country saying his support has been felt in all the denominations.

“The fight against corruption should not target some people. By blackmailing others we are not being genuine in this thing,” said Mr Munyaka.

Head of Nasa secretariat Norman Magaya backed Raila applauding the church for rejecting the car. He said Ruto should be put to task over his source of wealth saying he has a track record of corruption allegations.