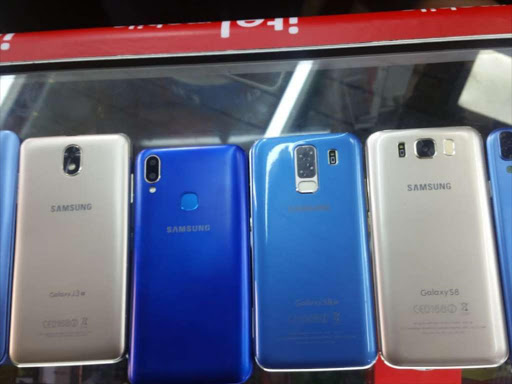 Some of the phones impounded during a raid by anti-counterfeit officials on Tom Mboya Street, February 26, 2019. /COURTESY

The Anti-Counterfeit Authority has arrested several people over the sale of Sh3 million fake Samsung products in Nairobi.

Batteries and phones were impounded during the raid on Tom Mboya Street.

The authority said the devices are usually imported as Unitel or Calsen Mobile and rebranded as Samsung by retailers on arrival in the country.

The raid was carried out by the authority and Samsung brand protection officers on Tuesday.

“Some of the counterfeit goods confiscated this morning include Samsung phones with removable IMEI stickers, which is not the case with authentic Samsung smartphones,” the authority said.

A report released by the Anti-Counterfeit Agency in February shows that nearly three-quarters of Kenyans use counterfeit goods.

Out of the 70 per cent above, only 19 per cent purchase counterfeit goods knowingly, 49.6 per cent claim they bought the goods because they were cheap, 17.3 per cent were looking for original items but couldn’t find and 18.3 per cent were not aware of the risks.

The most counterfeited goods in the market are mobile phones at 51.8 per cent, alcohol at 30.8 per cent, DVD players at 26.4 per cent while bottled water is at 24 per cent.