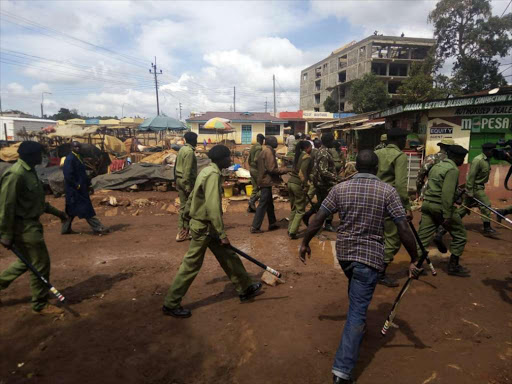 Traders at Chwele market in Bungoma on Monday protested hefty taxes imposed by the county government.

They engaged the police in running battles for the better part of the morning.

Several traders and a journalist were injured in the protests.

Traders complained that the drainage and sanitation in the market

is poor, yet the county is asking for a lot of cash.

They fear an outbreak of diseases

Traders also protested the arrest of their three officials and the area MCA Barasa Mukhongo on Sunday night.

Barasa had gone to the police station to visit the arrested officials when he was nabbed.

He was later on released on a cash bond after spending close to eight hours in the cells.

Mukhongo had asked the traders not to pay the tax until the county improves their working conditions. He was among

Mukhongo said the assembly allocated Sh50 million for revamping of the market but nothing has been done.

Khalaba MCA Majimbo Okumu said the county had failed to provide a good working environment for traders and it is their right to protest.

He said MCAs will not pass the supplementary budget until Governor Wycliffe Wangamati apologises to the traders in Chwele.

"We will not be intimidated nor cowed even if Wangamati arrests us for defending the people," he said.

"We want to thank Senator Moses Wetang’ula for intervening so that Mukhongo was released," Wamusai said.

of the market is completed.

Speaking at a separate function, Kabuchai MP James Mukwe asked Wangamati to have a meeting with the traders to resolve the stalemate.

He accused the Governor of neglecting Kabuchai in his development plans.