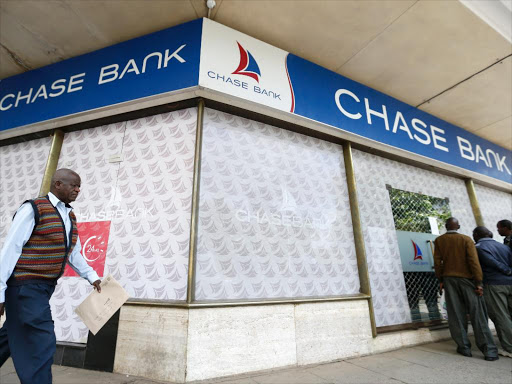 Former Chase Bank Kenya chairman Zafrullah Khan awarded himself a three-year consultancy contract for unspecified projects in the bank, 16 months before it collapsed on

A special audit report by Deloitte released a month after the CBK placed the bank into receivership shows the man at the centre of Sh14.9 billion internal bank heist was to earn $50,466 (Sh5.15 million) a month.

When the Star sought to know, from him, the kind of consultancy he was offering, the 62-year-old fumbled then hang up.

‘’Who is on the line? Please allow me to call you later,’’ Khan said in a feeble voice.

A former staff at the bank told the Star the Harvard educated money market honcho generously offered everyone he met, regardless of social economic status, a warm smile partly hidden in his signature moustache.

His low voice, however, took me back. It was uncharacteristic of a man whose voice while speaking at Chase Bank’s financial results attracted multiple echoes to tell the world just how well the lender was performing.

This development rekindled memories of Imperial Bank, another lender that had been placed under receivership almost six months earlier after a 13-year-old fraud orchestrated by a director was uncovered.

What followed was a vigorous forensic audit of the bank’s activities by Deloitte. And after 53 days, the verdict was out in

The report zeroed in on seven incidences that depict a bank robbery script from Hollywood only that in Chase Bank’s case, characters spilt no blood.

Although the two accounts worth Sh10.67 billion were initially classified as other assets in Chase Bank’s accounting records, they were later reclassified as loans and advances during the 2016 statutory audit.

The two said Sh7.5 billion was used to buy 12 properties for the bank by related entities and Sh3.1 billion as sums unsupported by documentation.

However, a forensic audit revealed that only Sh1.3 billion of Sh7.5 billion spent on 12 properties can be ascertained and that Khan and Duncan Kabui, the Group Managing Director, owned shares in five companies that owned the properties.

Nine Fifty Limited has three properties in Diani complex in Kwale valued at Sh25 million while Rinascimento Limited associated with Kabui has agricultural plots in Nyandarua valued at Sh40 million.

Other entities owned by Khan and Kabui, but listed as holding investments on behalf of the bank, are Mathatani and Lighthouse Property Limited.

November 11, 2015 from Khan asked Daviel Mavindu, who was a senior official at Chase Bank, now chief executive of Rafiki Microfinance to restrict circulation of management accounts of Riverside Mews Limited since they are ‘Personal stuff”.

The email contradicts Khan’s assertion that the related party was set up to hold investments for Chase Bank.

A review of emails also established other properties held by entities indicated as being under Chase Bank that had not been disclosed.

They include PEP Limited where Khan controls 99.9 per cent stake while Kabui and Ali Cheema own a paltry 0.1 per cent.

was put under receivership when most of the properties listed were bought in 2010.

‘’We did not obtain any evidence of Shariah Board approval for the Musharaka agreements as required under Section 10 of the bank’s Islamic banking policy,’’ Deloitte said.

It added that the internal auditor responsible for Shariah compliance was not aware of the existence of these agreements; proof the bank owned none of those properties.

The reporting of Sh3.1 billion as interest receivables from customers, the auditor said, was done to conceal the payments and not as a management decision to improve "balance sheet presentation" as indicated by the bank management.

According to the auditor, the amount which was first presented as interests receivables and later as amount unsupported consisted of Sh2.2 billion attributed to payments effected on behalf of Khan.

The audit report indicated that Sh1.153 billion as Khan’s receivables from the sale of shares and Sh1.05 billion as a bonus. The remaining was Sh6872 million was presented as losses from forex exchange.

Even so, the bonus payment which was authorized by the board in

contrary to board approval. The amount was also not taxed.

December 30, 2015, a day to closing its books for the financial year, the bank disbursed Sh1,023,900,000 to Camelia Investment, Coinbrook Holdings, Cleaopatra Holdings and Golden Azure Investment without adequate documentation or securities.

Those loans were not disclosed as insider despite Mwaura indicating that those firms belonged to Khan, the chairman.

Others who benefited directly from those loans include Mohammed Zasrullah Khan and Claude Wagner Khan, brothers of the bank’s chairman.

despite those entities being linked to bank directors.

Five term loans with a total balance of Sh1.608 billion were 180 days beyond loan status and no payment had been done. Some of those loans were linked to Rafiq Shariff, former Chase Bank director.

The forged loan facilities were then posted into CBK Settlement account, therefore reducing the outstanding balance by a similar amount in a classic white collar robbery that has become a key subject for case studies into failed banks in Kenya and beyond.

Chase Bank’s financial statement as at

December 31, 2015, reflected overdue interests on loans and advances at Sh5.6 billion. The audit, however, shows the loan book was overstated by Sh3.245 billion in violation of part 3: Section 3.6 (b) of CBK’s regulations.

The report, for instance, shows that Sh1.46 billion was withdrawn irregularly from

Most of the payments were made in favour of related entities, construction firms, law firms and two private companies.

In another incident, the discrepancy was noted in the bank’s external shilling and dollar-denominated secret account.

Auditors found out that the difference related to transactions was withdrawn by Mwaura for payments of properties abroad on behalf of Khan.

There were also irregular withdrawals by shareholders including Sh612, 992,970 from CBK settlement account and Development Bank by Mwaura on behalf of Carlo Van Wageningen and Chris Staubo, his business partner.

‘’The use of internal accounts for private individual transactions exposed the bank to money laundering,’’ the auditor said.

The CBK is pursuing Khan and eight other former senior managers and directors at Chase Bank and its related companies to recover Sh14.9 billion in court.