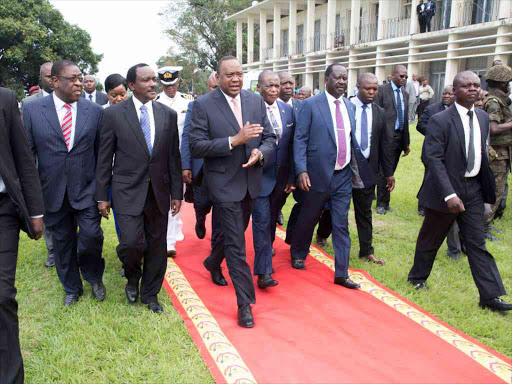 A Treasury dossier obtained yesterday by the Star outlined the government’s plan to roll out multi-billion projects, in only four years.

Critics have repeatedly claimed the Jubilee administration could be biting more than it can chew.

Of this, Sh2.01 trillion will be spent on development to “accelerate growth, create jobs, and reduce poverty.”

On housing, Kenyatta intends to construct 500,000 homes in five lots in four years.

Jubilee plans to build 15,000 units by empowering housing associations, 48,000 by counties, and 78,700 by Nairobi and Mombasa counties.

Counties are further expected to construct 45,000 units in the third phase while 20,000 more through redevelopment of Nairobi’s old estates. The government targets 10,000 units under the Police Housing Plan, 20,000 at the NSSF Mavoko land; 10,000 by cooperatives, and 20,000 by private developers.

Other 220,000 units will be put up in the fourth and fifth phase through cooperatives, private developers, and redevelopment of Nairobi’s old estates.

A deal between the government and the United Nations Office for Project Services (UNOP) should deliver 100,000 affordable units.

“Already, the government has identified appropriate sites for the housing programme and availed 7,000 acres of land.”

Gatundu South MP Moses Kuria on February 1 said he was pessimistic the project is achievable.

KMRC will provide long-term funding to financial institutions, “thereby increasing the availability and affordability of mortgage loans to Kenyans.”

The government has also set up the National Housing Development Fund which will mobilise capital for the affordable housing project.

The infrastructure sector has been allocated Sh411.3 billion, Sh417.3 billion and Sh424.3 billion for the three financial years.

Part of the money will be spent to construct of 8,245 km of roads, 150 bridges, rehabilitate 763km of roads, and maintain others stretching over 114,000 kilometres.

“Following the zero-based budgeting approach that we have adopted, we have been able to redirect these savings towards Big Four and their enablers, while continuing with pro-poor expenditures in health, education and protecting the vulnerable.”

“To improve efficiency of public investments, we froze initiation of new capital projects until the ongoing ones are complete,” Rotich said in the policy statement.

Kenyatta’s administration has also prioritised provision of Universal Health Coverage (UHC) to all. The scheme is at pilot stage in Machakos, Nyeri, Isiolo and Kisumu.

The state targets the Linda Mama initiative, subsidies for the poor, elderly and vulnerable groups, persons with mental illness, secondary school students and the informal sector.

Health infrastructure will be expanded to include specialised equipment and laboratories.

Education will take the lion’s share of the budget as Kenyatta seeks to recruit teachers to support the 100 per cent transition from class to Form One.

The monies will be spent on Free Primary Education and Free Day Secondary Education through increased capitation.

The government seeks to continue supporting the special needs education and provision of examination fees for all students writing KCPE and KCSE exams.

“The sector will also complete the ongoing construction and equipment of technical training institutes and support university education in public and private universities,” the policy statement states.

The National Treasury is currently conducting pre-budgeting hearings on the 2019/20 budget in line with requirements for public participation.

Agriculture, a key pillar of the Big Four, has been allocated Sh56.6 billion, Sh59.1 billion and Sh61.2 billion in the said period.

For rapid industrialisation under the manufacturing pillar, Uhuru plans to acquire equipment and machinery for the New KCC, expand dairy processing plants.

The projects will be funded under the General Economics and Commerce Affairs sector at Sh23.9 billion, Sh25.5 billion and Sh26.3 billion in three years.

The National Treasury has also allocated Sh272.1 billion for public administration, Sh200.8 billion for governance, law and order; and Sh146 billion for national security in the next financial year.

The Jubilee administration is also planning to spend Sh82.46 billion to mitigate on matters environment, water and natural resources, and Sh52.8 billion on social protection.