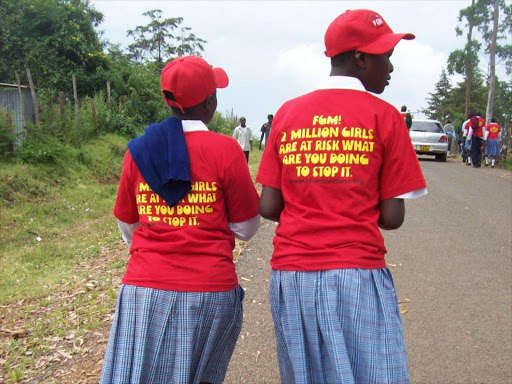 More than 3 million girls under 15 years are at the risk of female genital mutilation every year according to WHO and UNICEF.

The procedure entails the partial or total removal of the external female genitalia and other injuries to the female genital organs for non-medical reasons.

Two men in Kenya are rallying against the myths that perpetuate the violation of women’s and girls’ human rights through the centuries-old cultural tradition of female circumcision, more commonly known as female genital mutilation.

Tony Mwebia and Eliud Muindi believe that men have a bigger role to play in the fight against the vice.

Muindi attributes the popularity of female circumcision in certain communities to myths that girls are more likely to be married if they have been circumcised – even though there are no health benefits to the practice.

Though they work separately, both men are ardent campaigners against female genital mutilation and promoting the rights of girls and women.

They also believe it will take a critical mass of men to break through the myths.

Joyce Lavussa,a reproductive health expert with the World Health Organization is optimistic that the increased high-level advocacy efforts by such men will greatly broaden the needed awareness on the damaging effects of female genital mutilation.

“We need to provide both the technical and financial support for systems strengthening. We also need to support community engagement and social accountability as we work towards the abandonment of female genital mutilation,” Joyce said.

Female genital mutilation is a global public health concern, affecting at least an estimated 200 million girls and women with lifelong damage or complications, including severe pain, excessive bleeding, infections (such as tetanus), urinary problems, psychological problems and life-threatening circumstances for pregnant women and their babies during labour.

In addition to its advocacy for enactment and better enforcement of laws against the practice and its health-care worker training, WHO is researching the psychological impacts on girls, women and men in high-prevalence countries to generate evidence for better management of the long-term consequences and for strengthening prevention efforts.