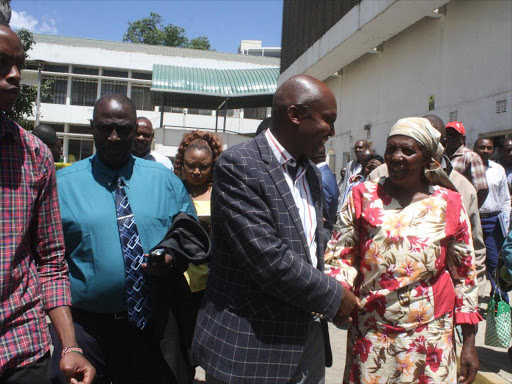 Kabazi MCA Peter Mbae was yesterday remanded alongside nine other suspects for incitement over compensation to Solai dam victims. Nakuru resident magistrate Vyonne Khatambi directed they be remanded at the Njoro police station for a day.

“The court will read through the application by the prosecution and the responses by the counsel then deliver a ruling on Friday (today) morning,” Khatambi said.

The prosecution said they were not ready to issue plea to the accused person because the police had not completed investigations.

“Investigation requires humble time. We have leads that might lead to further arrests,” Cherui said.

She said the crimes might have been committed on Wednesday at Solai in Kabazi ward. Other suspects arrested yesterday were detained at Menengai police station.

Mbae was remanded at Njoro police station because of tension in Solai. His lawyer, Kipkoech Bernard, said his detention was illegal because the case was political and not criminal.

“Six hundred victims of Solai dam are represented by their leader who was holding a public gathering. Police are not sure of the offences the suspects will face which means they want to frustrate him for fighting for the rights of his people,” Kipkoech said. Mbae has filed a petition before Justice Dalmas Ohungo pushing for the compensation of victims.

He wants an environmental impact assessment and restoration done. Kipkoech said they wrote to Patel Dam owners to compensate the victims.

A meeting between the Kenya Human Rights Commission and the victims aborted on Wednesday after police acordoned off the venue at Solai centre.