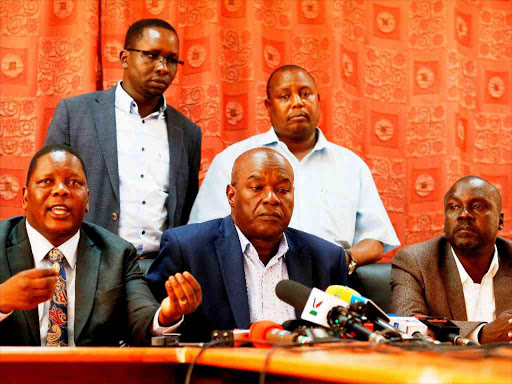 The National Cereals and Produce Board has been accused of imposing unnecessary measures to lock out maize farmers from selling produce to the parastatal.

The leaders told the press at Parliament buildings that the introduction of bureaucracy by the board is a hindrance and meant to impoverish farmers.

“It is frustrating that NCPB has put unreasonable, backward, anti-farming demands to farmers before delivery of their produce. As a matter of fact, most of the maize farmers in North Rift have no title deeds,” Kositany said.

“We strongly believe these conditions are meant to inhibit rather than stimulate food production in Kenya. This defeats the food sufficiency goal that the government has envisaged in the Big Four agenda.”

The leaders said most farmers are stranded with truckloads of maize in various depots after failing to meet NCPB’s new demands.

“Three weeks after the President gave this order, NCPB has done nothing to effect the announcement that was overwhelmingly seen as a huge relief by thousands of farmers,” Kositany said.

The most affected depots, the leaders said, are Eldoret, Ziwa, Moi’s Bridge and Kitale.

They demanded the cereals board to exempt farmers from the new regulations and buy all maize delivered so long as it was produced locally.

In November last year, the government approved the purchase of two million bags of maize from local farmers at Sh2,300 per bag.

The Cabinet chaired by President Uhuru Kenyatta approved the Ministry of Agriculture’s proposal to buy the maize as part of government efforts to support farmers.

Later, the President increased the price by Sh200 and ordered the Agriculture ministry to start receiving the produce from farmers across the country.