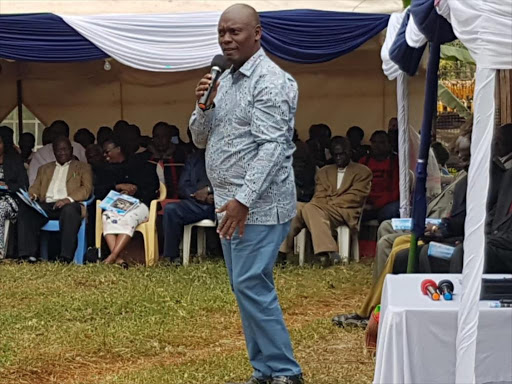 Former Kiambu Governor William Kabogo has warned Kenyans and leaders against attacking the Judiciary saying it’s a threat to democracy.

Kabogo said that the criticism erodes public confidence in the Judiciary.

He pointed a finger to cartels who want to brand judges as corrupt in order to hamper service delivery to Kenyans.

Speaking to the Star on Monday, the ex-governor said that when government officers attack the judges, they are sending a message about how they want future cases to be decided.

“The judges must be allowed to do their work without interference. When government officers attack judges, they also attack and undermine our democracy,” Kabogo said.

He urged Kenyans to protect and stand with the Judiciary as judicial independence is derived from the people.

“We have several instances of disrespect for the law of Kenya, Judges, and courts expressed by vulgar and insulting words by individuals or cartels with intent to frustrate the structures set by the constitution," he said.

Recently, the Office of the Director of Public Prosecution (ODPP) and the Directorate of Criminal Investigations (DCI) accused the Judiciary of issuing conservatory orders that derail cases and allowing accused state officers to access their offices.

They accused Maraga of leniency with suspects thus abetting corruption deeds in the country.

President Uhuru Kenyatta has set his eyes on the Judiciary, ODPP, and CID to tackle the corruption cases which may derail the implementation of the Big Four Agenda.

Speaking during the Anti-Corruption Conference at the Bomas of Kenya last week,

"You will continue blaming the Judiciary and we are not going to move anywhere because of the way your frame the cases. You can put two people on a charge sheet and provide evidence," he said.

Maraga told President Uhuru that the war against corruption was going to be won on hard evidence and not by “gimmicks” adding that some criticisms threaten the Judiciary's independence.