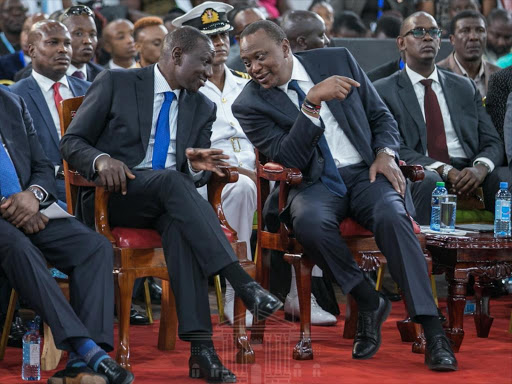 Deputy President William Ruto chats with President Uhuru Kenyatta during the Anti-Corruption Conference at the Bomas of Kenya on January 25, 2019. /COURTESY

shows that the country is getting worse.

released on Tuesday shows Kenya has dropped one point in the global Corruption Perceptions Index for 2018.

TI Executive Director Samuel Kimeu said in the report that the executive has denied Kenyans public participation on national policies, which created avenues for graft activities.

The report places Kenya at position 144 out of 180 countries.

“The analysis shows a disturbing link between corruption and the health of democracies, where countries with higher rates of corruption also have weaker democratic institutions and political rights,” Kimeu said in the statement.

Kenya has now dropped far behind Tanzania to the same level as Uganda followed closely by Burundi and Somalia.

It is followed a distant second by Tanzania with 36, Kenya and Uganda scoring 27 and Burundi with 17 points.

“Zero is highly corrupt while 100 very clean. The report measures the perceived levels of public sector corruption in countries and territories worldwide,” the report said.

Kimeu added that Kenya’s score is below the global average of 43 and Sub Saharan Africa’s mean of 32.

“It is a composite index, a combination of surveys and assessments of corruption which is collected by a variety of reputable institutions,” he said.

The CPI highlights top countries are Denmark and New Zealand with scores of 88 and 87, respectively.

The bottom countries are Somalia, Syria and South Sudan with scores of 10, 13 and 13, in that order.

“Our research makes a clear link between having a healthy democracy and successfully fighting public sector corruption,”

“Corruption is much more likely to flourish where democratic foundations are weak and, as we have seen in many countries, where undemocratic and populist politicians can use it to their advantage.”