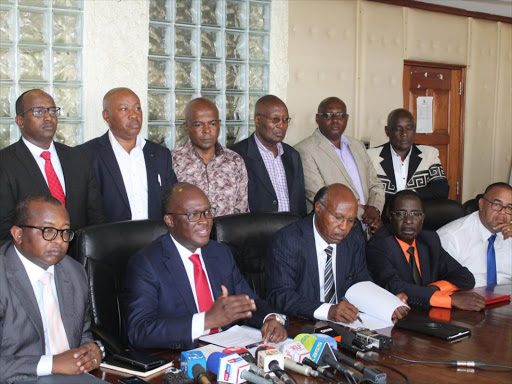 The government has announced that Nairobi will be

on Wednesdays and Saturdays starting

said there will be dedicated parking in Uhuru Park and Railways as no car will be allowed within the CBD during these two days.

will be allowed to sell their wares.

The PS said this will generate Sh39.5 million daily revenue to the government from over 100,000 hawkers.

Maringa said the move which is a pilot program, will employ many, generating Sh 3.8 billion annually.

"The pilot stage is starting off with Moi Avenue, Harambee

He said the exercise will be fully done in Kenyatta

Avenue and Haile Selassie, before going to Westlands.

The PS said they have also explored staggering working hours for city residents.

Over 5,000 stalls will be erected during

He said the first batch of 64 BRT buses

is ready for shipping from South Africa.

The buses will have detailed safety designs that the CS said

Macharia said the private sector will be behind the day to day operations of BRT.

The CS said the move is part of a wider plan to de-congest the city in order to attract investors.

"The BRT system will be run in collaboration with the private sector. The BRT buses will be owned and managed by a Special Purpose Vehicles in which private PSV operators will be shareholders," Macharia said.

Macharia also announced the procurement of 11 diesel modified units of trains that will be increased to 20.

He said a multi-sectoral team had jetted out of the country to Spain to negotiate the diesel modified units.

Counties under the Nairobi Metropolitan Area Transport Authority (Namata) such as Kiambu, Kajiado, Machakos and Murang'a will also be roped in in government's latest bid of de-congestion.