Our lives are in danger, Wamalwa’s children say 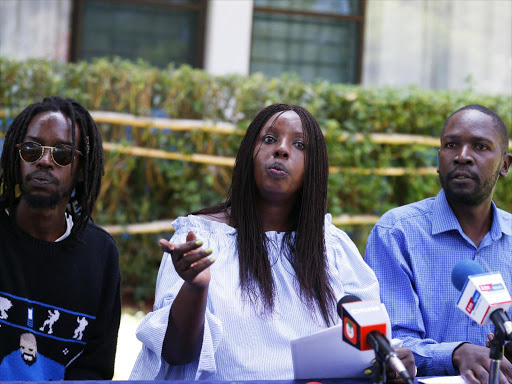 Two children of former Vice President Michael Wamalwa say their lives are in danger and relatives plan to kick them out of their home.

Michelle Nafuna, known as Chichi, and Derek Mboya accused their uncle Devolution CS Eugene Wamalwa of teaming up with relatives to kick them out from their father’s estate.

Yesterday, Chichi, told the Star they have received threats from relatives. They are not treating them lightly, she said.

She said she was bluntly threatened by one of her aunts. “She told me they expected me to be a Wamalwa but it turns out I’m not. She has threatened me saying I should watch my space…I have talked to my lawyer and we are filing for a protective application against all the Wamalwas,” Chichi said.

“It was meant to cast our family in a bad light. It is regrettable and sad that this matter has turned out this way,” Alice said. She said the two want to keep everything for themselves.

CS Eugene has remained mum and elusive as the dispute tears the family apart. He declined to comment to the Star on Friday and said he would speak on Saturday. Reached for a comment yesterday, Eugene referred the Star to Alice’s press statement.

“She is the only authorised person to speak on behalf of the estate,” the CS stated.

But Derek said his step-siblings did not address the issues they had raised, instead resorting to personalised attacks against him.

“We were all present when our mother begged them to release her medical insurance while suffering from cancer. They hung up on her. They didn’t deny it in their statement because it’s true. We watched our mother break down and cry and we cried with her,” he said.

On Saturday, the Star exclusively reported that the family is rocked by a property tussle, which has forced Chichi out of school. She has been out for one year.

She says her step-siblings have never helped her and she depends solely on her brother Derek and her aunt Jacqueleen Nangami Nyangweso.

During the burial of Ambassador Yvonne Wamalwa, Deputy President William Ruto promised the government would ensure her children are educated.

Yvonne’s family claims they are facing hard times as their father’s pension has not been processed 15 years after his death.

Wamalwa died without a will. But on September 12, 2003, Yvonne applied and was granted letters of administration.

“If you ask for help you are told, ‘If you want to continue with school, if you want to go back to Australia [where Derek had worked], if you want food’, then sell the house,” Chichi said in reference to their Karen home.

“When you go and look for help, you’re told there are people in your family who can take care of you, why don’t you go to them? These same people are the one’s ruining your life.”

At the centre of the row is the Karen home that was partly paid for by the Kenyan government after Wamalwa’s death.

By the time he died, Wamalwa had paid Sh19.5 million and the balance of Sh31.9 million was cleared by the government.