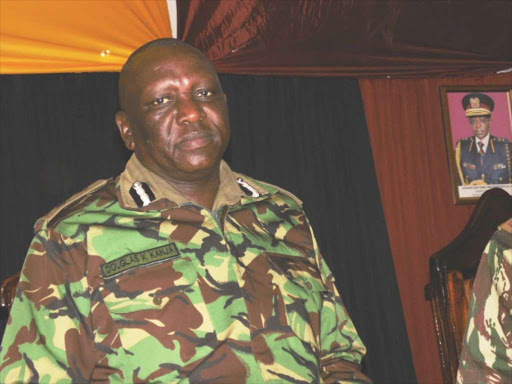 Boinnet will exit at the end of March after a four–year non-renewable term.

With a month left, there has been intense lobbying and political manoeuvres for the top seat.

Kinoti, also a former police spokesman, is a no-nonsense cop. He is at the forefront of the war on corruption, and has made high-profile arrests.

Kanja is a long-serving police officer, who has risen through the ranks to his current position of Assistant Inspector General, heading the GSU.

Prior to his current posting, he served as the Kilifi county police chief. He is a specialist in firearms and has served as the Police Service Chief Armoury.

The well-coordinated response by his team was widely praised. President Uhuru Kenyatta acknowledged him at a meeting of security chiefs in Mombasa last week.

Owino is a familiar face in the media in his police spokesman’s role. He is a fierce defender of police, a career officer, who has risen through the ranks from a police constable to Assistant Inspector General of police.

Owino has served as a police station commander at the Kenya Ports in Mombasa, and a divisional commander in Njoro. He also was at the DCI as an investigator.

Kiraithe was a long-serving police spokesman before he was appointed a general manager at the Kenya Airports Authority in-charge of security. He was later named Government spokesman.

Kiraithe is also a career officer, who has risen through the ranks. He previously served in the Anti-Stock Theft Unit. He was among nine top police officers who had been shortlisted for the position of Inspector General in 2012. Former IG David Kimaiyo got the job.

Kiraithe is likely to face challenges despite his impressive CV due to ethnic balancing; some top serving police commanders are also from Meru.

The government has initiated recruitment of new members of the National Police Service Commission. It is tasked with recruiting the next IG.

Ten individuals, among them former National Assembly speaker Kenneth Marende, have been shortlisted for interviews as commissioners. The term of the former commissioners expired last year.

The NPSC will advertise the position of IG, shortlist applicants, conduct interviews and forward two names to the President.

The President will then submit his choice to Parliament for vetting and adoption.