I’m glad God fought for me, says granny after 3 years 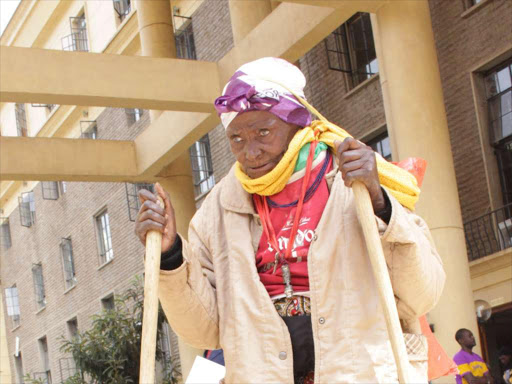 Justice was delayed for three years but yesterday it finally was served.

“I’m happy that God has finally fought for me,” 93-year-old Njeri Kiriba told the Star after she won her land battle and received trasfer papers.

Njeri spent many cold nights outside the Milimani law courts every time her case came up for hearing.

A jovial Njeri yesterday said she is happy that she has been given papers for two plots in Githurai.

The papers were handed to her yesterday by the deputy registrars of the court after her story was highlighted in the Star.

Using her walking sticks and clutching the papers tightly, she strode off. She said it took her many months just to get the transfer papers signed.

Njeri, who is frail and has to support herself on canes, has been tirelessly walking from Githurai to court at Upper Hill each time her case came up.

She would arrive at the court precincts at 5pm and sit outside waiting for nightfall. She would spend the night outside the court without food, waiting for daybreak to ensure she does not miss the hearing.

Njeri walks with a red bag. The red bag is clutched close to her frail body because it contains vital documents.

When she talked to the Star, she said she does not talk to people much because she fears corrupt people might take advantage of her.

The mother of three and a widows says she did not even have a lawyer to represent her in the land case she filed against a company called Kenya Ihenya Company.

She sued Kenya Ihenya Company, seeking to restrain it from harassing her or trespassing on her parcel.

The old woman in her suit papers says she bought two plots from the company and was issued with shares certificates. However, despite paying in full, she has been denied ballot papers in respect of the two plots.

Her attempts to resolve the issue by reporting it to several government agencies failed because the company did not cooperate, she says.

The company admitted Njeri was a member and she was issued with two certificates for the two plots.

The company said a meeting in 1985 resolved that for each member to get a plot, they needed to pay Sh3,500.

However, Njeri was unable to pay the full amount and was allowed to pay for one plot by installments, which she completed in 1996.

In November 2017, High Court judge Kossy Bor ruled in favour of Njeri, directing she be given both plots. The judge directed the company to execute the transfer documents to facilitate the registration of Njeri as the proprietor of plot numbers Nairobi Block 124/144 and 145.

The court also barred the company from harassing the elderly woman in relation to the land.