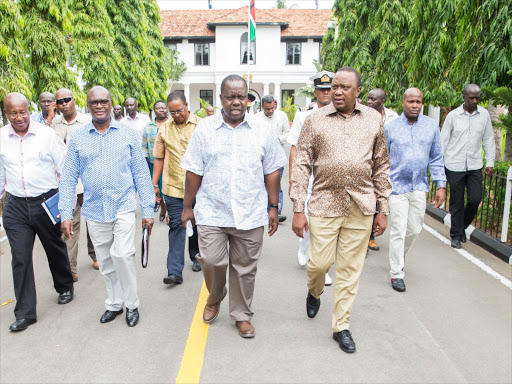 The latest changes bring Interior Cabinet Secretary Fred Matiangi to the heart of the executive.

The elevation of Matiang’i with supervisory roles across government is likely to whittle down Deputy President William Ruto’s influence.

Matiang’i will take charge of the implementation and monitoring of all development projects initiated and funded by the national government through a new Cabinet sub-committee.

The sub-committee will be known as the National Development Implementation and Communication Cabinet Committee. It brings on board all CSs, Attorney General Kihara Kariuki and Head of Public Service Joseph Kinyua.

Under the new directive, the conceptualisation, monitoring, implementation and evaluation will be done right from the grassroots.

This means MPs will no longer be trooping to Ruto’s office to lobby for development projects. In a clear show of confidence in the no-nonsense Matiang’i, Uhuru also handed him the critical National Transport and Safety Authority, which was initially in the giant Transport ministry under James Macharia.

Uhuru’s decision to hand Matiang’i the elevated role comes only months after he spearheaded the merciless crackdown on the chaotic matatu industry to restore order through the enforcement of traffic rules. It is work in progress.

In a new executive order, Uhuru established four powerful committees with Matiang’i at the helm.

The Matiangi-led National Development Implementation and Communication Cabinet Committee will report directly to the President.

It would provide overall supervisory leadership throughout the delivery circle of all national government’s programmes and projects.

The President’s move is seen as a deliberate strategy to take charge of his legacy projects, especially the Big Four Agenda, coming just days after a storm in his Central Kenya backyard that he had neglected the region.

Ruto who has been the face of monitoring and commissioning of government projects is reportedly in bad books with the powerful Matiang’i. It remains unclear how the two would relate going forward, with the DP known to be traversing the country nearly every weekend to dish out development goodies.

According to the executive order dated Monday this week, Treasury Cabinet Secretary Henry Rotich will deputise Matiang’i in the Cabinet sub-committee.

Among the central roles of the committee would be to ensure coordinated strategic communication to the public and other stakeholders in the progress of government programmes and projects.

Other functions include monitoring and evaluation of the follow-up mechanism for resources allocated for priority programmes and projects to ensure proper use and realizstion of targeted outcomes.

The committee has been given sweeping powers and could recommend termination of some contracts and recommend legal action in cases where there is presumed loss of public funds.

It will provide “timely guidance on appropriate measures to address challenges constraining effective implementation and delivery of development programmes and projects”.

The Kibicho led-team will propose budgetary provisions in annual ministerial budgets and medium-term expenditure framework for priority initiatives. The team will also draw up an implementation calendar of critical government projects across the country.

It will also prepare accurate monthly progess reports on government projects and report to the Matiang’i-led Cabinet sub-committee.

At the level of the defunct provincial administration, the President has strengthened the role of regional commissioners, making them chairmen of a new body called Regional Development Implementation Coordination Committee. At this level, the committee will coordinate and supervise the implementation of national government projects being undertaken at the regional level.

“[It will] identify and suggest solutions for bottlenecks that hinder the implementation of national government development programmes and projects within the region,” the order reads.

It would comprise all regional directors of ministries and parastatals and a senior director of the presidential delivery unit.

At the county level, there would be the County Development and Implementation Coordination Committee to be chaired by the county commissioner.

To ensure timely implementation of national government projects, the committee will hold forums to foster public participation at the grassroots. And to effectively rally Kenyans behind government development plans, the county commissioners will conduct regular public barazas and Nyumba Kumi to educate the public on the benefits of such projects.

This will involve “accessible avenues for broader public participation and feedback with respect to all national government programmes and projects,” the executive order says.

In a second executive order regarding the management and coordination of national transport and safety, Uhuru moved all NTSA operations to the Interior Ministry.

Late last year, Matiang’i spearheaded a massive crackdown on the chaotic matatu industry and pushed for strict enforcement of the Michuki rules to restore order on Kenyans roads.

Matiang’i’s bold move was interpreted by some quarters as encroaching on the mandate of the Transport ministry. Under the new directive, the Interior Ministry will oversee the registration and licensing of vehicles, inspection, regulation of public service vehicles and implementation of new curriculum for driving schools.

The Transport department will remain with a leaner responsibility, including national roads development policy, mechanical and transport services, as well as policy on axle load control.