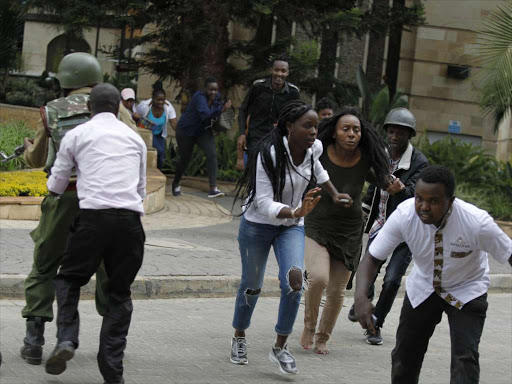 Survivors run to safety after being evacuated from Dusit Complex after a terror attack on January 15 2019. MONICAH MWANGI

The six heavily armed men who attacked DusitD2 Hotel and office complex had stocked extra weapons in a room within the hotel.

Police officers discovered a stockpile of grenades and rounds of ammunition in a bulletproof room where the commander of the team was hiding before he was killed.

“It took us very long to break into the room because the armoured door was very difficult to break. When we finally did, the commander, who was the last person to be killed, had so many grenades and rounds of ammunition in the room,” said a senior police officer who was part of the operation.

Investigators are now probing the possibility that hotel employees could have facilitated the attackers before Tuesday. While some of the grenades and rounds of ammunition were on the floor, many more were found in different drawers wrapped up in hotel laundry bags.

Police believe the deadly weapons, several rounds of magazines and bombs, may have been brought into the hotel earlier.

“We suspect an inside job considering these people had been frequenting the place as they schemed the attack,” said another officer who spoke on condition of anonymity because he is not the official police spokesperson.

The officers who battled the terrorists said their commander was well trained and seemed to understand the hotel very well.

“The five attackers had a lot of ammunition and their commander was very well trained. He gave us a difficult time and when he hid in the armoured room, that slowed us down as well,” another officer said.

Five suspects, four men and a woman, appeared in court on Friday with their heads bowed in connection with Tuesday’s attack that left 21 people dead.

A Canadian citizen is among the five suspects detained for 30 days as a multi-agency team continues with its investigations. They are the first suspects to appear in connection with the DusitD2 attack but did not take pleas.

Director of Public Prosecution Noordin Haji asked for more time to carry out investigations that he described as “complex and transnational.”

Four of the suspects are Kenyan citizens. The fifth is a Canadian-Somali. They were remanded for 30 days.

Yesterday some of officers who arrived at the scene within minutes of the first exposition told of how they were able to push the killers to a corner and how that decision saved many lives.

DCI George Kinoti was the first to arrive at the scene with 10 heavily armed and highly trained officers who are part of his rapid response team.

Despite a hail of bullets, Kinoti’s team drove their boss’s armed car right to the entrance of Dusit, forcing the attackers to run inside the hotel.

“Once we had them contained inside Dusit we then fought to ensure that they didn’t come out and enter any other building. Meanwhile, other civilians were helping evacuate people from the buildings,” said one officer.

In a statement, Haji said so far preliminary investigations confirm that the five suspects arrested over the matter have a case to answer.

“I am satisfied that there is probable cause to continue with investigations against all the suspects. The investigations into this matter are complex and transnational and would therefore require sufficient time and resources to uncover the entire criminal syndicate,” he said.

“The detectives are looking for a woman suspected to have ferried weapons from Kiunga through the port city of Mombasa to Nairobi,” a police official who did not wish to be named said, referring to a region near the Somali border.

Al Shabaab, a Somalia-based al Qaeda affiliate fighting to impose strict Islamic law, said it carried out the assault on the upscale DusitD2 compound over US President Donald Trump’s decision to recognise Jerusalem as Israel’s capital.

Yesterday, investigations took a dramatic twist after police traced 26-year-old Eric Kinyanjui Munyi to a hospital in Kiambu and established that he was not among the attackers killed.

DCI officers have been pursuing Kinyajui after it emerged that a cell phone the dead terrorists used was registered with his particulars.

Detectives from Dagoretti DCI traced Kinyanjui to Nazareth Hospital where he is currently working as a trainee nurse. Kinyanjui was in shock when the officers questioned him about the Dusit Hotel attack.

Kinyanjui told the police he was not in communication with any of the killed men and that his identity card and particulars could have been used to register the cell phone which the terrorists were using.

Kinyanjui was questioned by the police but was not required to travel to Nairobi to record statements. Police also matched his face and footage of the CCTV cameras of the attackers. He will record statements with police later.

Kinyanjui told the police he lost his identity card sometime last July and he reported the matter to the police and obtained a police abstract. He later used the abstract to replace his lost ID which he believes the criminals used to register their cell phone.