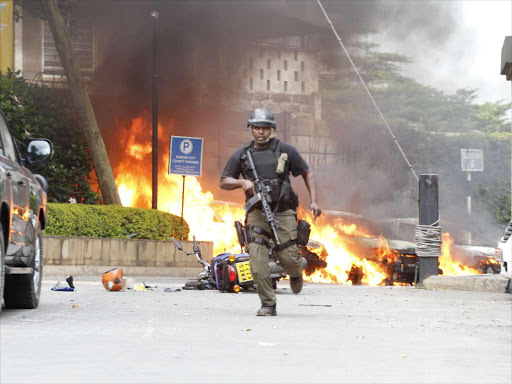 A security officet runs near a fire outside Dusit Hotel after an attack yesterday. Photo/Enos Teche

On January 15, 2016, Kenya’s military forces suffered their worst attack in Somalia when an ambush on its camp in El–Adde left more than 170 soldiers dead.

Just as the country’s wounds were healing, al Shabaab militants opened them with yet another attack yesterday — this time in Nairobi.

A quiet third anniversary of the El-Addde attack would have passed unnoticed were it not for the Dusit Hotel attack. Al Shabaab militants immediately claimed responsibility, sending the country into mourning.

The Somalia-based militant group told the media that they were behind the attack, describing it as “ongoing” to both Reuters and al-Jazeera international media outlets.

Coming after lunch hour, the terrorists attacked Kenyans, some of whom had just checked returned to work, throwing afternoon plans into disarray.

For minutes, explosions and gunfire rocked the upscale hotel, as people fled to the streets.

The El-Adde attack was staged on January 15, 2016, as KDF soldiers continued with their offensive against the militants inside Somalia.

The 2016 attack saw the terrorists run over their military camp and butcher KDF soldiers working under the Amisom command in one of the country’s darkest battleground losses.

Kenya suffered its largest-ever military casualties at the battle of El Adde in the Gedo region of Somalia.

However, the precise extent of that defeat and many of the details have not been made public.

Despite an inquiry by the Kenya Defence Forces and an ongoing parliamentary investigation, there is not yet a full public account of the battle and the lessons that should be drawn from it. There has also not been much public debate about what it means for the African Union Mission in Somalia.

The El Adde was the third Amisom forward operating base overrun by al Shabaab in seven months.

Al Shabaab tactics should thus have been predictable. Yet, problems to do with poor operational setup and procedures, and the decision to deploy such vulnerable forward operating bases in remote areas, garrisoned by so few troops, have persisted.

On that morning, al Shabaab fighters attacked and overran the Amisom forward operating base garrisoned by KDF troops from the 9th Rifle Battalion. Following several failed rescue attempts, KDF ground troops finally reached the base on January 18 and took full control of the camp the following day.

Initially, al Shabaab claimed the attack was the work of its Saleh Nabhan brigade. They said their fighters killed more than 100 KDF soldiers and held an undisclosed number hostage.

Shortly after the battle, the terror group posted numerous photos of the fallen KDF soldiers on the Internet. It also exhibited a dozen identity cards of KDF soldiers.

On January 27, 2017, al Shabaab militants attacked a KDF camp in Somalia in a manner akin to the El Adde attack. The attack was staged at Kulbiyow — an area located near Kenya’s border with Somalia.

Al Shabaab militants put the figure at 57, although the figure was highly disputed by the Kenyan authorities. But the two attacks attracted fury from Kenyans, who called for the withdrawal of KDF soldiers from Somalia to avert more revenge attacks by al Shabaab.

However, President Uhuru Kenyatta said the KDF soldiers would remain in Somalia until the militants are wiped out. But unlike the El-Adde attack that was executed inside foreign land, yesterday the attackers swung into action at the heart of the capital Nairobi and in broad daylight.