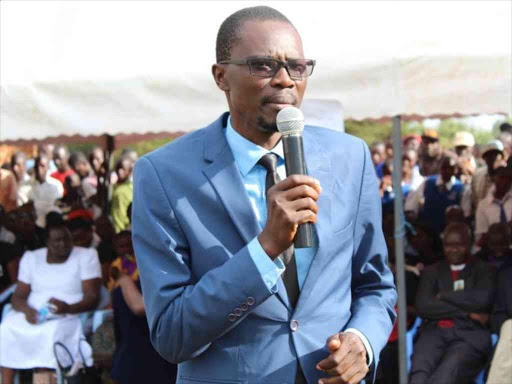 The Opposition's influence in Parliament has waned since the handshake deal, Kimilili MP Didimus Barasa has said.

to now elect a new Minority Leader, saying the current one

He said Mbadi should be replaced as he has failed to serve Kenyans in his position.

have now changed tune," he said.

Addressing a press conference on Friday in his office in Kimilili town,

ODM is now behaving as if it's part of the government.

He said NASA MPs who were previously been sworn critics of the Jubilee regime are now heaping praise on the government.

"We are seeing people behaving in a funny way with various rumours, propaganda and lies being peddled in Jubilee party by ODM members who think the handshake gave them a nod to be part of the Jubilee regime."

Barasa said the opposition is constitutionally mandated to help fight for the rights of Kenyans and as such should never be seen as going to bed with the ruling party.

He advised the President to be cautious with the opposition chief whom he claimed could be out to wreck the ruling coalition from within.

Politicians allied to Deputy President William Ruto have been sceptical about Raila's intentions since the March 9, 2018 handshake saying his aim is to derail Jubilee's succession agenda.

Ruto himself has been on record as saying he's not against the handshake but he would not allow Raila to cause confusion in Jubilee.

Barasa said the Jubilee party has already settled on Ruto as its presidential candidate in 2022 adding that no amount of noise and politicking will change that.