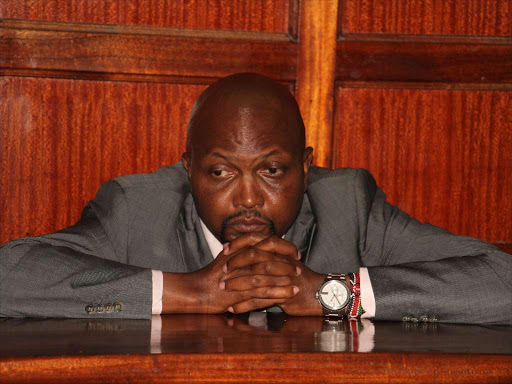 Sources at the Speaker's office had disclosed Kuria had tendered his resignation.

The legislator later dismissed the claims during a press conference at the Parliament Buildings and said his life was in danger.

He said some people whom he did not mention have had selfish objectives and have been threatening his life.

"Those with selfish objectives and who have been jumping up and down with threats over my life details with which I have shared with the DCI who is my friend and a person with the capacity to act will work on it," he said.

Former Jubilee vice-chairman David Murathe had also allegedly tendered his resignation as Gatanga MP in 1997 then disowned the letter given to the speaker saying it was forged.

Kuria apologised to President Uhuru Kenyatta over his new year's eve remarks that the Central Kenya region has been neglected.

"I want to say this, as we come to the end of 2019, I want you to think seriously about your habit of voting in large numbers only to end up missing out on development projects," he said.

Kuria said he took the move so as to bring an end to the current political temperatures.

He maintained that the country has had a troubled history and the current 2022 succession debate would likely blow the issues out of context.

"We cannot continue living as captives to the fears of the past. We have had a troubled history and the current situation will be blown out of context," he said.

The legislator said he was happy that the likes of Martha Karua, Peter Kenneth, Millie Odhiambo and Gladys Wanga have joined the camp to support the head of state.

"I am happy that I have been vindicated. Now everyone is seeing the good person in Uhuru whom I have always been defending. I have found myself on the wrong side of the law because of him and I am ready to continue supporting that cause,' he added.

"I have requested the secretariat to give me a chance to address on how we can achieve new dawn. The country is facing momentous challenges with serious budgetary and revenue constraints. People are struggling and we cannot make this through continuous politicking," he said.

While apologising to Mt Kenya counties, Kuria said he was sorry for insinuating that there is no development in the region.

He said the Raila Uhuru handshake should, however, ensure that all the historical injustices.

Post a comment
WATCH: The latest videos from the Star
by STAR REPORTER, @TheStarKenya
News
10 January 2019 - 15:00
Read The E-Paper