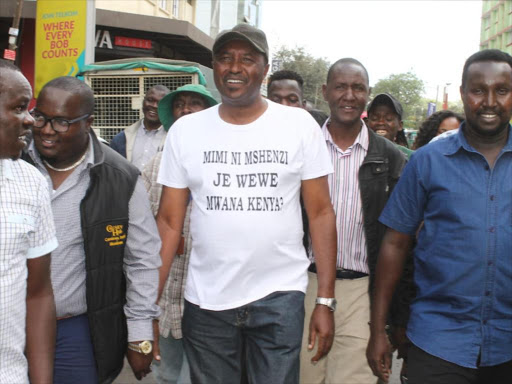 A rebellion against President Uhuru Kenyatta is brewing in Central Kenya, partly fanned by Deputy President William Ruto’s allies who say the head of state seems to have abandoned his number two.

Late last evening, Ruto in a tactical move threw his weight behind Uhuru reiterating that development projects must be rolled out equitably across the country.

In a series of tweets, Ruto asked disaffected leaders to use appropriate channels to address their concerns instead of resorting to moves that undermine Uhuru and the Jubilee leadership.

“Projects promised for decades became a reality under Jubilee many Kenyans especially Jubilee members understandably are asking us for more. This must be tempered with the reality of what we can afford. No region, community or Kenyan will be left behind now or in future,”he stated.

He went on: “Jubilee members must however use appropriate mechanism to channel matters concerning us and avoid unnecessary negative debate that only undermine the party , the party leadership and the President.”

The revolt burst into the open yesterday after leaders from the region condemned the President for referring to some of them as washenzi, loosely translated as fools.

Although Uhuru and Ruto have not been in direct public confrontation, words have slipped out, making it clear that all is not well between them, especially after Uhuru embraced Opposition leader Raila Odinga after the handshake on March 9.

There has been disquiet in Mount Kenya over alleged neglect by State House in favour of ‘opposition zones’ after Uhuru was reelected to his second and final term.

But the revolt has now been amplified by the fierce succession debate sweeping the region and fears that Uhuru was slowly turning his back on Ruto in favour of Raila and other opposition candidates.

Interviews by the Star piece together a mutiny fuelled by Uhuru’s perceived inaccessibility, plus lack of jobs and development projects in Central Kenya.

“Most of the projects Uhuru has finished in Central Kenya were started by Kibaki. Only a village away from Uhuru’s home gets tap water once a week,” a Kiambu resident yesterday told the Star.

The President was reelected overwhelmingly in Central and Rift Valley on the basis of his trumpeted development track record.

Earlier yesterday, Nyeri Town MP Ngunjiri Wambugu had questioned why Ruto was silent while his allies were lashing out at Uhuru, yet he has been on a project launching spree in Central Kenya.

“Why is DP Ruto quiet when his Mt Kenya Tangatanga team are attacking the President and claiming he has not done anything in Mount Kenya? Wasn’t he [Ruto] in Mount Kenya region on average every week last year launching ‘development projects’ on behalf of his boss as his mtu ya mkono?” he asked.

Veteran politician Maina Kamanda dismissed the complaining MPs as individuals who have been paid to make noise.

“The President is President for the entire country. The development agenda does not come from the President. It comes from the entire government including MPs. The same MPs are also managing Kerra roads. Women reps have a kitty, while governors control billions,” he told the Star.

He went on, “They want to pass the buck back to the President but I can tell you when the President tours their constituencies, these people will hide under their beds…They have dug their political graves.”

Some of the leaders, including MP Moses Kuria from Uhuru’s rural Gatundu South, have accused the President of neglecting them.

They argue that under the Constitution, the President has sweeping powers that he can use to ensure more money is allocated to Kiambu, Nyeri, Murang’a, Nyandarua and Nakuru counties.

Today, tens of former legislators will hold a press conference in Nairobi where they are likely to turn the heat up on Ruto for allegedly engineering the anti-Uhuru insurgency in Central.

The revolt is unprecedented, with Uhuru becoming the first President to be openly defied in his own backyard since Independence — barely two years after he was reelected. The President has three years and eight months to go in State House.

“There is no government that has pushed Kikuyus into such a dangerous corner politically and economically as this government,” Bahati MP Kimani Ngunjiri protested in a no-hold-barred press conference on Sunday.

But on Monday, a furious Uhuru rubbished the claims and branded its proponents washenzi.

The slur immediately triggered a massive backlash on social media and some people openly criticised the President for branding his voters fools.

There were claims, however, that the seemingly spontaneous reaction is sponsored by individuals opposed to the truce between Uhuru and Raila.

In an unprecedented move yesterday, Ngunjiri launched what he called the Washenzi Movement in clear defiance of the head of state.

The two-term MP took a one-kilometer walk along Nakuru’s busy Kenyatta Avenue, castigating the President over the slur and claiming he was being misled by Raila.

Dressed in a white T-shirt emblazoned with Mimi Ni Mshenzi, Je Wewe Mwana Kenya, and accompanied by tens of supporters, the MP said the movement was meant to pressure the President to honour his pledge to back Ruto for President in 2022.

“It’s very painful because we are seeing our son being misled,” Ngunjiri said.

The MP gave a clear signal they would no longer be intimidated by Uhuru and for the first time are ready to stand against him.

Meru senator Mithika Linturi said Jubilee must immediately call for internal elections and alleged there was dictatorship in the party.

“We cannot also launch projects and yet the amount allocated in the budget cannot run the projects. People want good health, education and many other things,” he told the Star.

Moses Kuria was the first to fire a salvo at Uhuru on New Year’s Eve, claiming Central Kenya was being used only as a voting machine.

On Monday, he quickly responded to Uhuru’s slur.

“H.E. the President is 100 per cent right. He is spot on. We need development in every corner of this country. It is in that spirit and in line with the President’s position that I believe Mt Kenya region also deserves development, just like any other region. Right now it’s not happening,” Kuria said.

Speaking in Parliament yesterday, 11 MPs from Mt Kenya region said while the Jubilee administration has rolled out projects in the region, much more is needed.

They dismissed claims the President has neglected the region, saying there is development in every constituency.

The lawmakers said they have a structured framework to engage the President when they are lobbying for projects.

“As leaders from the region, we appreciate the work the jubilee government has done in our region since 2013. We are however aware that there is still more work to be done to meet expectations of our people,” Embu’s Cecily Mbarire, convenor of the press conference, said.

She added,“We will continue to engaging the government to realise the development projects already in the pipeline, as well as new ones we are working on.”

They called on leaders, especially Jubilee MPs, to respect the President, saying the Constitution mandates him to develop every part of the country.

“It is the mandate of every elected leader, both local and regional, to lobby for resources and development for their individual regions, counties and constituencies,” Mbarire said.

Maore dismissed Kuria and Wambugu,saying jubilee regime has not discriminated against any region.

“Those are politics of individuals and we do not agree with them. We have been given development by the government and no region in Mt Kenya has been left out,” he said.