US attacks on Somalia's al Shabaab increase under Trump 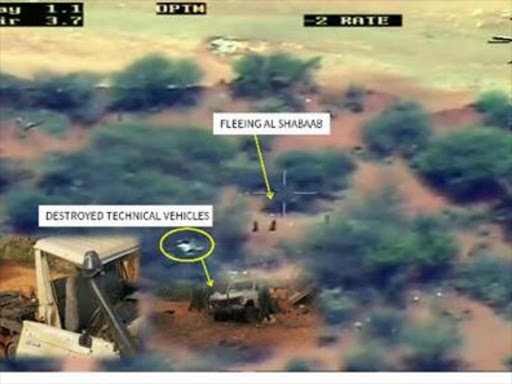 DESTROYED: A photo allegedly showing an al Shabaab camp in Somalia destroyed during a KDF air strike following the killing of 28 Kenyans by the militia. Photo/COURTESY

Donald Trump's presidency has coincided with a sharp rise in US-led airstrikes in Somalia and the trend is set to continue in 2019.

In a speech in December outlining the US' Africa policy, President Trump's National Security Adviser John Bolton said "terrorists operating in Africa have... repeatedly targeted US citizens and interests".

He gave the impression that there would be no let up in the struggle against militant Islamist groups, such as the Somalia-based al-Shabab, which is affiliated to al-Qaeda.

In March 2017, the Pentagon received White House approval to expand its fight against the militants in the Horn of Africa nation.

Commanders now no longer require high-level vetting to approve strikes on al-Shabab in "areas of active hostilities" in Somalia.

"It allows [us] to prosecute targets in a more rapid fashion," said General Thomas Walhauser of US Africa Command (Africom).

The move has seen increased attacks by aircraft, as well as the first public deployment of US boots on the ground since 1993 to "advise and assist" Somali government troops.

Africom has now carried out at least 46 confirmed airstrikes in Somalia in 2018, following the previous record of 38 in 2017, according to the Bureau of Investigative Journalism (BIJ).

Some single strikes have focused on large groups of militants. For example, about 60 were killed on 12 October around Harardere in the central Mudug region, in what was the largest airstrike of its kind in nearly a year.

Other strikes focused on individuals, such as the lone militant targeted and killed six days earlier in Kunyo Barrow in southern Somalia.

Compared to previous years, 2017 and 2018 marked a significant increase in US action against al-Shabab.

In fact, a BIJ tally reveals that at least 538 people have been killed in these airstrikes since the beginning of 2017 - far more than the previous 10 years combined - although not every strike was recorded to have killed someone.

Africom says the "airstrikes reduce al-Shabab's ability to plot future attacks, disrupt its leadership networks, and degrade its freedom of manoeuvre within the region". This shows that every trace of the group is considered a threat.

As noted by the Long War Journal, the strikes are part of a wider pattern that has ranged from targeting top commanders to the rank and file who make up the group's visible presence on the ground.

But apart from one senior al-Shabab commander, Ali Mohamed Hussein, killed in a joint US-Somalia military raid in the southern Lower Shabelle region in August 2017, few have been significant enough to be named by the US since Mr Trump approved the expansion of military operations in Somalia.

Al-Shabab militants, like other jihadist groups, are well aware of the threat from the skies.

According to a senior regional security official, the fighters now avoid congregating in large groups. They move in units of three or four and only converge to carry out attacks, including on bases of African Union troops and Somali government forces.

The group has not lost control of territory in central and southern parts of Somalia, where it is trying to set up its own administration, including raising taxes from the local population.

These are vast areas - far larger than the urban centres that the federal government controls in the same regions.

Bill Roggio and Alexandra Gutowski of the Long War Journal conclude that this reflects al-Shabab's primary goal, adopted from al-Qaeda, which is "to overthrow local governments and create emirates which will eventually coalesce into an Islamic caliphate".

US 'adheres' to laws of conflict

The jihadist group has displayed its confidence through attacks such as the ambush last June on a combined force of Somali, Kenyan and American troops in Jamame town in southern Somalia, in which a US special forces soldier was killed.

Despite the insistence of the Somali government and Amisom that the group has been eliminated from the capital, Mogadishu, one of its leaders, Ali Dhere, was recently photographed hosting a charity event near the city.

Al-Shabab still mounts occasional forays into neighbouring Kenya's border regions carrying out ambushes and explosive attacks on security forces, and it often publishes videos documenting these incidents as part of its media operation.

The group sometimes responds to Ethiopian, Kenyan and US airstrikes by claiming that the casualties were innocent civilians, but from the US action over the past two years, there are no independent records of civilians killed.

Meanwhile, at least 32 have been injured in areas held by the militants, according to BIJ statistics.

In a statement to the BBC, Africom spokeswoman Becky Farmer noted that the US military command for Africa "has not discovered or assessed any civilian casualties resulting from our operations over the last two years".

She added: "In fact, [we go] to extraordinary lengths to reduce the likelihood of civilian casualties, exercising restraint as a matter of policy that regularly exceeds the restrictions of the law of armed conflict."

There are still vivid memories of America's disastrous exit during its last major military action in Somalia in 1994.

At the time, two US Black Hawk helicopters were shot down in Mogadishu.

In the ensuing battle, hundreds of Somalis were estimated to have died. Some 18 Americans and two UN soldiers were killed.

However, the Pentagon would consider the option of airstrikes today to be far less risky to US troops and possibly more effective in taking out targets.

As a result, the campaign is unlikely to be affected by the recent announcement of an impending reduction of US troops in Africa.

So far, the increased airstrikes have not given the US, the Somali government and AU troops the upper hand. Al-Shabab will be content to retain its vast geographical control.

Even if its commanders are taken out in targeted strikes, the group has established a system to replace them and to continue the conflict for the foreseeable future.