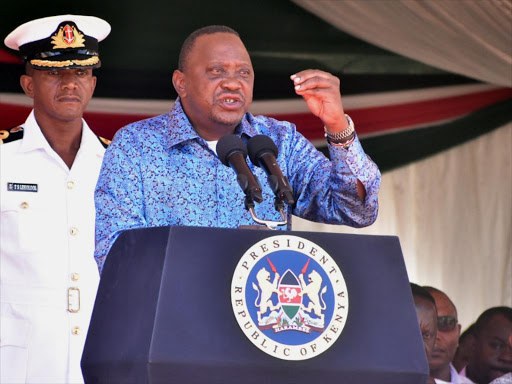 President Uhuru Kenyatta in Mombasa on Monday for the launch of the Mama Ngina Drive upgrade, January 7, 2019. /ANDREW KASUKU

complaining about development in Central Kenya calling them 'washenzi'.

Gatundu South MP Moses Kuria had claimed that Uhuru has neglected Central Kenya when it comes to development projects.

The MP's New Year's Eve rant went viral, with a section of leaders saying he should go to rehab after appearing to be drunk.

Speaking during the commissioning of Mama Ngina drive in Mombasa county on Monday, Uhuru said his focus is to take development across the country.

"Nitaendelea kuzunguka kila corner ya Kenya na kazi ya maendeleo...kutoka Mombasa hadi Kisumu, Moyale hadi Namanga ..hii siasa ya kusema ya kwamba mtu ametoka mahala fulani ati maendeleo itaelekezwa mahala fulani jamani tuwahe (I will continue to traverse every corner of Kenya, bringing growth and development; from Kisumu, Moyale, up until Namanga. This politics of saying someone comes from such and such a place so development should be made in that region should stop)," he said.

"Every citizen is entitled to development regardless of where the leader comes from kwa hivyo hao washenzi muwachane na mimi (so can the fools leave me alone)."

A stern-talking Uhuru said development will no longer benefit a few individuals in the country.

"Tamaa ya uongozi ni sawa, lakini tamaa ya uongozi haiwezi zidi matatizo na shida ya wananchi. haiwezekani. hakuna nchi itaendelea ikiwa tamaa ya kiongozi ndio inaongoza nchi (The desire for leadership is fine, but it should not be more than the desire to solve citizens' problems. No country can develop when leaders' desire for power is what drives it)."

In a statement read by secretary Simon Kamau Muhoho, the group said they appreciate the development agenda the President has initiated throughout the country, including Kuria's Gatundu South constituency.

Kuria thereafter appeared to offer a reluctant apology, saying that he and the President have known each other for years and he would not disrespect him.

He then went on to say that if his remarks were offensive, he was sorry.

They told Kuria to apologise to Uhuru within seven days, failing which, they will take unspecified action against him.

Post a comment
WATCH: The latest videos from the Star
by NANCY AGUTU @nancyagutu
News
07 January 2019 - 15:00
Read The E-Paper