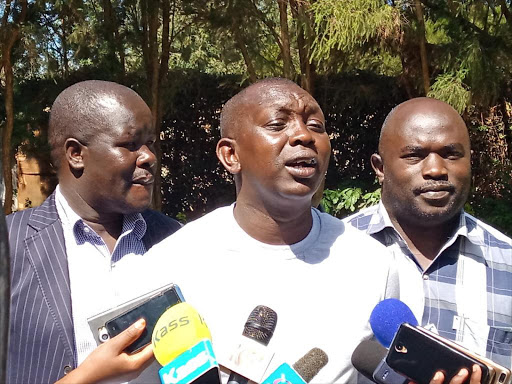 "Tuju and Murathe are rejects who should be removed from the party through elections," Sudi told the Star in Eldoret.

He said the two are being used to rock Jubilee from within and block DP Ruto from succeeding Uhuru in 2022.

"We brought Tuju into Jubilee, not because he had any support, but because we wanted to create a national face for the party. He is now baggage and should be removed," Sudi said.

vowed that Ruto and his team will remain in Jubilee and the DP will run on the party's ticket for the top seat.

Sudi dared Murathe to go to the Supreme Court to block the DP from vying for State House.

On Saturday, Murathe said in Siaya Ruto is not eligible to contest for President in 2022 and should retire with his boss.

The former Gatanga MP said he will go to the apex court to stop Ruto. He spoke at the funeral of Tuju's brother in Rarieda.

"He is free to do so, but he should know that the court is not his mother's property. We also know where it is," Sudi said.

Sudi cautioned Murathe and "the people debating the next poll recklessly" that they are toying with the nation's unity and stability.

"The unity between Kalenjins and Kikuyus is only sustained by God. Let the likes of Murathe not think they will joke with it," Sudi said.

The MP said Ruto has proved to be a tough politician and is now being fought from all corners.

Sudi said most of the DP's rivals are drunkards who wake up from hangovers and get surprised when they see him working in all parts of the country.

The leaders said the DP is ready to face his rivals within and outside Jubilee.

Post a comment
WATCH: The latest videos from the Star
by By MATHEWS NDANYI @ndanyi_mathews
News
06 January 2019 - 15:00
Read The E-Paper