Uhuru distances himself from Murathe on Ruto retirement remark 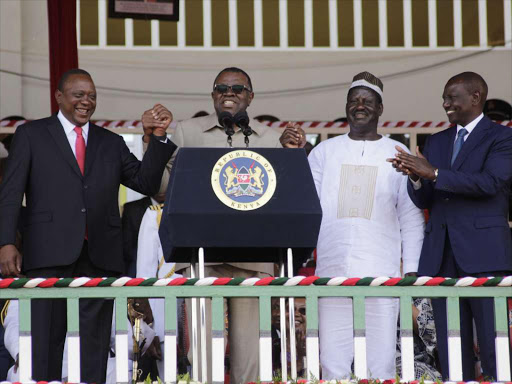 President Uhuru Kenyatta has distanced himself from claims that Jubilee party will not support Deputy President William Ruto’s 2022 presidential bid.

Uhuru on Friday said all he knows is that Jubilee as a party has its own plan ahead of the next election.

Expressing his annoyance with the continued talk of the 2022 succession politics, Uhuru refused to be drawn into the debate triggered by his ally and JP vice-chair David Murathe.

(But we must prepare the country first just as we have started the journey with my brother Raila to ensure that no Kenyan will shed blood due an election and this if my plan going forward. Those who want to rush election can go ahead but I am not part of such discussions).

This comes after Murathe on Sunday said there exists no Jubilee Party MoU to support Ruto’s 2022 presidential bid.

He said the only deal they had is to support UhuRuto presidency for two terms which was achieved.

The outspoken Murathe said Ruto should retire alongside Uhuru come 2022 because they have both served their terms.

(We do not have any MoU with anybody that it is a must we shall support them in 2022. If they had such a deal with Uhuru then it is upon them. This government you are serving with Uhuru and it is a 50/50 deal why should you demand for another share in 2022).

Murathe was speaking in Vihiga County during the Maragoli festival in Mbale.

With regards to building Bridges, Uhuru maintained that the deal is not about 2022 but a Kenya that will live in unity.

“Last year was marred with two elections. I insist that I won the election but the country was so divided. We lost our agenda due to politics and my urge to have talks with Raila was about the country as to whether the standoff is helping,” he said.

Uhuru said they resolved to have talks because after several engagements they realized they only differed politically but shared the same ideologies about what is ailing the country.

“And by the way I can reaffirm that I have a partner in Raila in fighting corruption and uniting Kenya. He is of ODM and I am jubilee but he believes in the same ideologies as I do. We have never spoken about 2022. It is not about referendum but what will hold the future generation together,” he said.

The head of state maintained that the country is on the right track on the fight against corruption.

He said just as many Kenyans do, he is optimistic that the courts will serve justice.

Uhuru said the executive has done its part in terms of ensuring maximum support and budgetary allocations and thus there should be no reason as to why justice should not be served.

“We expect courts to serve justice to Kenyans. They must finalise the cases and let Kenyans know the verdict. We are interfering with their independence to determine who should be jailed or not but we are saying we should have a Judiciary that is active, hear the cases expeditiously and independently,” he added.

Uhuru said Kenyans are tired of waiting for months and years and have raised concerns as to whether there should be timelines for these cases to be completed.

“Let judiciary tell us whether they need more time. It is important for Kenya to have an independent and responsible judiciary. I have said it clearly that corruption has no colour, tribe or religion. This is a national disaster and so people should not hide behind tribes to curtail justice,” Uhuru said.

Uhuru said it disappoints when his name is linked to some corrupt individuals using his name to fleece public money.

“When it comes to corruption I have no brother sister cousin or relative, let each one bear their cross. It is unfortunate that politicians politicize a fight that belongs to every single Kenyan. I want to leave a legacy where people will long to work in the public service, not because of the riches they will amass but to prove servant leadership,” he added.

Uhuru said the war on graft will be won with the ability to show conviction.

The president further refuted claims that his government is trying to force some sectors within the Big Frou Agenda on people.

“We are not forcing agendas on people but we are in talks so that we can present the ideas for them to contemplate on them. New programs suffer misgivings and clarity but let those who are not sure about the agenda speak out and tell us their fears, all we are encouraging a saving culture versus spending culture,’ he said.

Uhuru said, for instance, there has been a lot of misinformation on the 1.5 per cent contribution towards the affordable housing.

“I want to assure Kenyans that this is not about tax as it has been meant but saving and a contribution towards owning a house,” he said.

Uhuru further refuted claims that the Chinese government was planning to take the Port of Mombasa if Kenya fails to pay its loans.

"The issue of the take over of Mombasa Port by China is pure propaganda. We are ahead of our payment schedule for the SGR loan and there is no cause of alarm," Uhuru said.

The president said though there has been public outrage and concerns about Chinese lending, his government will continue to borrow.

"We must appreciate where we are. All these issues are just a chicken in the egg. We are borrowing to handle the huge infrastructure deficit. It is not about incurring debt but how we use it," he said.

Uhuru said it is not only China that is lending its money to Kenya but also Japan, France, Germany and America.

“China is not seeking to colonise us but they understand us to our point of need. By matter of fact we are ahead of the payment schedule and so Kenyans must ignore any propaganda being peddled. I will continue to borrow but develop,” Uhuru said.