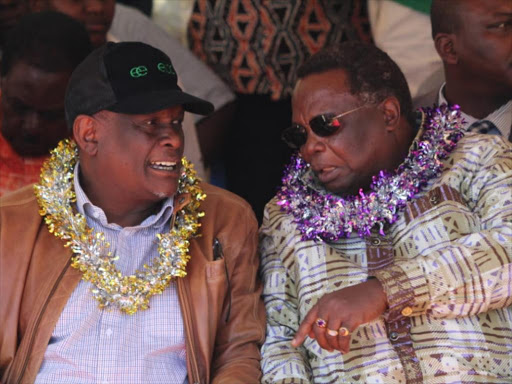 Luhya unity and calls for a referendum dominated the Maragoli Cultural Festival held on Wednesday.

Jubilee vice chairman David Murathe called on the community to unite if they want to clinch presidency.

He told the community not to be 'hoodwinked' into thinking President Uhuru Kenyatta will support Deputy President William Ruto in 2022.

" Let you not be deceived by the Tangatanga movement because both Ruto and Uhuru have served their full terms and should retire together," he said.

Murathe said Ruto should not 'pretend' to be speaking on behalf of Jubilee on matters of the referendum, saying there was a need to change the Constitution so that it can be more accommodating.

"We don't want a Constitution where the winner takes it all; it's always a recipe for post-election violence," he said.

Bungoma Senator Moses Wetang'ula said the Luhya community is united and will prove the naysayers wrong in 2022.

"Nobody can stop an idea whose time has come; we are united like never before like Siamese twins," he said.

Wetang'ula said the top Luhya leadership is seeking to form alliances with other communities.

ANC leader Musalia Mudavadi said he optimistic that Luhya unity will lead to someone from the community clinching the presidency.

He urged the community not to be 'hoodwinked', adding that the sons of Mulembe had what it takes to take the presidency.

" Our unity is our strength because we have joined hands, I can assure you that this community will produce a President," Mudavadi said.

Devolution CS Eugene Wamalwa said the leaders of the community will no longer fight in public, but work together to ensure the community benefits.

"Instead of fighting, we will ensure we fight for you and the development of this place," he said.

Cotu secretary general Francis Atwoli said there was need to change the Constitution to be in tune with current political needs.

"We must change this Constitution to accommodate all the political big wigs after all, constitutions are made with people in mind," he said.

Makueni Governor Kivutha Kibwana told the Luhya community to unite first and work with others to capture the presidency.

He said choosing one Luhya candidate this early was dangerous.

"Let's not hurry those with ambitions in our community; that time will come," Wangamati said.

Lugari MP Ayub Savula said the community will not negotiate for power with Ruto, but will only work with Uhuru.

"Our choice is Musalia and deputy president Ruto should stop dreaming that we will negotiate anything with him," he said.

Savula said the calls for the referendum were unstoppable.