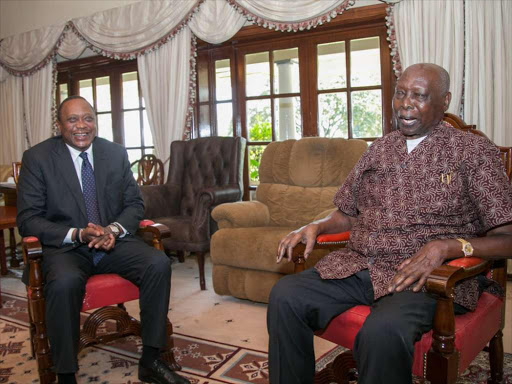 President Uhuru Kenyatta with former President Daniel arap Moi during their meeting at his home in Kabarak, July 28, 2018. /PSCU

His physician David Silverstein said the former president will spend a couple of nights in the hospital as doctors check on his health.

"Dr Silverstein said the former President will spend a couple of nights in the hospital to accord the doctors enough time to carry out their investigations," a statement from Moi's office read.

Moi who celebrated his 94th birthday this year has maintained a low profile since he left office in 2002.

His last public appearance was on October 26, 2017, when he cast his vote at the Kabarak University polling station during the repeat presidential election.

In March this year, the retired president flew to Tel Aviv, Israel for a knee operation.

He was accompanied by his son Baringo senator Gideon Moi and Dr Silverstein.

Since then he has relatively been well and has in the past months hosted several high profile visitors at his Kabarak home in Nakuru county.

In his latest meeting with former Vice President Kalonzo Musyoka in Kabarak on November 16, the former president urged young leaders to embrace unity and honesty.

“Because the future of this country is in your hands, young leaders should forge friendship rather than disintegration, ” Moi said.

Others who have visited Moi at his home are President Uhuru Kenyatta, ODM leader Raila Odinga, and Mombasa Governor Hassan Joho.

On May 4, Deputy President William Ruto’s visit to Kabarak failed to materialise as the former president was said to be busy during a medical check-up with his doctors.

Post a comment
WATCH: The latest videos from the Star
by By JOSEPH KANGOGO
News
13 December 2018 - 00:30
Read The E-Paper