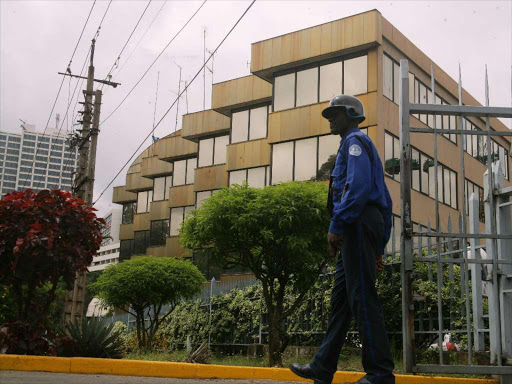 A security guard at the integrity center where National Housing corporation staff were grilled over the illegal allocation of public housing units to senior government officials.Photo/HEZRON NJOROGE

Kenya yesterday signed an agreement with Jersey for the repatriation of Sh516 million corruption proceeds stashed on the island.

The cash will be used to fund development programmes. The Framework for Return of Assets from Corruption and Crime Agreement will also enable Kenya to strengthen its partnership with other countries in an effort to prevent, identify and provide for restitution mechanisms of illicit financial flows and the proceeds.

Attorney General Kihara Kariuki and Jersey’s External Affairs Minister Ian Gorst signed the deal at Harambee House, Nairobi, yesterday. Kihara said Kenya and Jersey’s cooperation in the timely sharing of financial intelligence and recovery of assets is critical in the war on corruption and money laundering.

Gorst said his country has put in place measures to forestal the transfer and harbouring of illicit wealth from Kenya and other countries.

“We’re signing this agreement to ensure Jersey is not used as the destination of corruption proceeds from Kenya. It will ensure any proceeds of corruption are prosecuted and repatriated,” he said.

This is not the first time the countries have partnered to recover corruption proceeds. In 2007, they committed to Mutual Legal Assistance over investigations into the Anglo Leasing scandal. Suspects had their bank accounts frozen — with about Sh518 million. The government also received documents and evidence that were used in the prosecution of suspects.

Kenya has already established the requisite authorities to implement the Anti-Money Laundering-Combating the Financing of Terrorism controls through the Financial Reporting Centre for financial intelligence and the Assets Recovery Agency.