I'll be the next president after Uhuru - Kalonzo 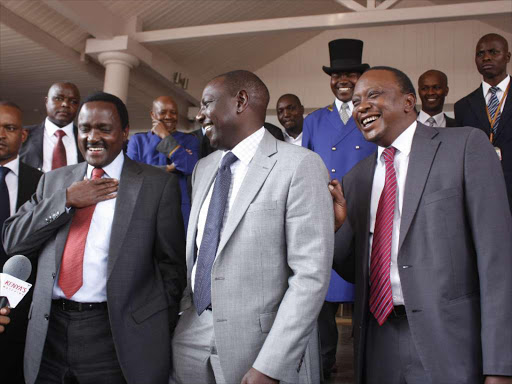 Wiper leader Kalonzo Musyoka now says he will be Kenya's next president after Uhuru Kenyatta.

Kalonzo said after he served as Vice President, it seems like a spell was cast on him but he will break the spell in 2022.

said there is enough time for political realignment ahead of the 2022 presidential race that will see him ascend to the top office.

He said Kenya should expect a massive political realignment that will usher in a new breed of leadership.

The former VP and current special envoy for peace in South Sudan said the ongoing 2022 debate is healthy but should not preoccupy the ultimate goal of serving Kenyans.

Kalonzo said he served as the Vice President of Kenya a position he said is always a heartbeat to the presidency.

He said holders of that position are however fought constantly.

“I was the 10th Vice President, but we have had only four presidents, being a Vice President or Deputy President is really a slippery business, when you hold that office, you are severely fought, pulled down, dragged all over and all other dangerous episodes just to bar you from inheriting the presidency, but this time round we will deliver," he said.

On matters corruption, Kalonzo said those who are ethnicising the fight against the vice should be “forgiven” but the president and the institutions charged with the mandate must not relent.

He said the President deserves applause for the much he has achieved so far adding that even the pollsters have noticed the great progress in the sustained war.

This was the first time for Kalonzo to tour the Western region after the Raila swearing in as Peoples President.

His sentiments were echoed by Devolution CS Eugene Wamalwa who praised Kalonzo for accepting to lead in the South Sudan peace initiative after President Uhuru’s recommendation him to the IGAD.

Wamalwa said the Wiper Leader has what it take to help get lasting solution to the conflict in the newest state.

Wamalwa further said politicising the current war on graft will derail the efforts and gains so far experienced.

“We happy that since 9th of march, the political tension of “NASA Hoa” has subsided and now we are working together for a prosperous and a more cohesive nation," he said.