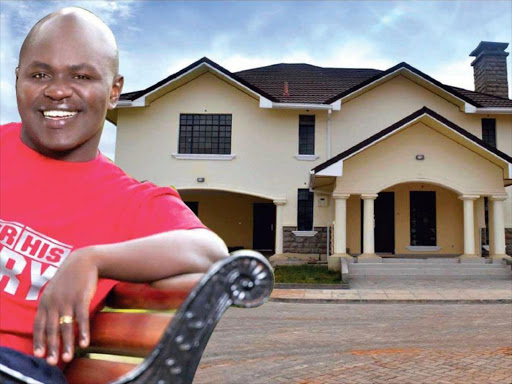 Fredrick Sagwe inset, an NHIF customer care officer, and one of the houses he bought at Green Park Villa in Athi River. /COURTESY

A receptionist at the National Hospital Insurance

Fund bought eight houses worth Sh160 million between 2013 and 2017 at an upmarket estate in Athi River.

He also owns a chain of car and carpet-cleaning businesses across Nairobi valued at Sh50 million. They are managed by his wife whom he married at a lavish wedding held at Safari Park at a cost of Sh25 million.

Fredrick Sagwe Onyancha is among 20 people the Director of Public Prosecutions Noordin Haji wants arrested for suspected corruption at the NHIF.

Sagwe grew up in Umoja estate in Eastlands and went to Nakuru High School. He went to USIU and after graduation he joined the NHIF in 2007 as a front office desk officer on a salary of Sh50,000.

Raised by a relative in Buruburu, Sagwe’s lifestyle suddenly changed in 2013 after he joined the tender evaluation committee at NHIF. The committee awards any tender, including those worth multi-million shillings.

With a salary of Sh150,000 a month currently, Sagwe is a multi-millionaire who has a taste for the good things of life. He is not a party animal and goes out only to Carnivore restaurant.

Sagwe has three sons and all of them go to international schools in Nairobi.

According to police investigating illegal dealings at NHIF, the 39-year old first bought four houses valued at 20 million each in 2013.

He then bought top-of-the range cars including Range Rovers and Toyota V8s.

Sagwe then embarked on sprucing up his house in Green Park estate located along Mombasa Road with a panoramic view of the nearby Lukenya Hills. The investigators have valued the house and all the fittings at Sh40 million.

The Assets Recovery team is moving to court to repossess the house and other properties.

The house was once featured in a KTN programme dubbed Ideal Space, where Sagwe’s wife explained the expensive fittings in their palatial home.

“He is a very polite person who sometimes tries to look like a modest man by driving a small car,” said one of the investigating officers who has been on his case for months now.

Sagwe had not been arrested by press time yesterday.

Earlier, there was a scuffle at Kenya Pipeline Company managing director Joe Sang's home as DCI detectives arrested him.

The officers almost broke the doors to gain entry into the Muthaiga home after the embattled KPC boss reportedly declined to cooperate.

The detectives stormed the home at about midnight but took several hours to get hold of the suspect.

Sang was arrested alongside head of procurement Vincent Cheruiyot and legal officer Gloria Khafafa over a Sh11 billion scam at the oil distributor.

They are accused of misappropriating funds during the procurement and construction of the Kisumu Oil Jetty.

DPP Noordin Haji in a statement said he had satisfactory grounds to hold the senior officers culpable.

Haji said he had given consent for their prosecution as well as for persons involved in the NHIF scandal.

Those arrested are detained at the Muthaiga police station having been questioned at the DCI headquarters.

"We shall arraign them on Monday," Haji said when he addressed a plea bargaining workshop attended by ODPP heads of county in Naivasha.

The suspects will be charged with abuse of office contrary to the Anti-Corruption and Economic Crimes Act, willful failure to comply with applicable laws relating to management of public funds and engaging in a project without prior planning.

Sang has been battling graft allegations arising from KPC's loss of over 23 million litres of spilled fuel.

Most of the fuel, valued at Sh2.3 billion, was reportedly spilled at Lisa Ranch in Makueni and at Ngong Forest.

However, environmental management body Nema dismissed the spillage claims saying such a quantity could have resulted into a serious disaster.

Sang's lot and those implicated in the NHIF scam are among the latest high profile cases that the DPP is pursuing with a view to securing convictions.

KPC has been in the eye of a storm since May when detectives raided the homes of senior officials facing the probe into loss of billions of shillings in flawed procurement.

The series of scandals kicked off after KPC tendered to deliver 60 hydrant pit valves for Jomo Kenyatta International Airport at Sh647 million during the 2013/14 financial year.

In focus was the procurement for projects among them the 122km Sinendet-Kisumu Pipeline (Line 6 ) which was constructed at Sh5.7 billion.

The DCI has also been investigating suspected loss of cash during construction of the Sh1.8 billion Kisumu Oil Jetty.

Sang, who took over in April 2016, had earlier said some of the dealings were executed during then KPC managing director Charles Tanui's tenure.

He wrote to KPC's board on Wednesday saying he would not seek an extension of his contract after April. He cited unspecified personal reasons for his decision.

For the NHIF scandal, detectives are building a case against 20 suspects linked to the loss of Sh1.5 billion.

Mwangi and finance director Wilbert Kurgat are out on bond in another case where they are charged with obstructing investigations by withholding documents related to the scandal.

Directors of Web Tribe Ltd, the company that runs the Jambo Pay platform, are also in the list of suspects implicated in the Sh1.5 billion scam.

They are Danson Muchemi and Muriithi. The investigators suspect that the firm was used to siphon NHIF cash.

The specific charges for the suspects in the NHIF scam are yet to be drawn.

Jambo Pay was awarded a tender to offer payment services to NHIF when Kirgotty was CEO. It is said the bidder was picked without due process.

A report before the NHIF board revealed that the firm had received over Sh860 million in commissions for payments made through banks.

The latest arrests come at a time the DPP has taken steps to make it difficult for graft suspects, especially state officers, to continue serving in their capacities while facing a probe.

Haji, in measures to tighten the agency's cases, on Wednesday announced that he had prequalified Philip Murgor, a former DPP, former Mombasa mayor Taib Ali Taib and James Kihara as private practitioners.

The move was opposed by lawyers James Orengo and Okong'o Omogeni but Haji has maintained his ground saying local lawyers feared handling the matter where Mwilu faces fraud charges. The court is set to make a determination on the matter on January 17, 2019.

Post a comment
WATCH: The latest videos from the Star
by MOSES ODHIAMBO and KAMORE MAINA
News
08 December 2018 - 06:00
Read The E-Paper