Kenyans question appointment of Moody Awori, 91, to Sports Fund Board 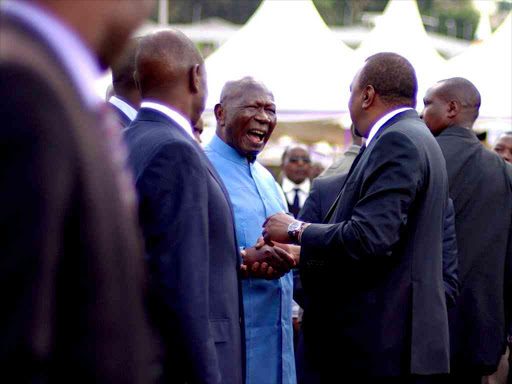 In a Gazette notice dated November 28,

board will be made up of five Principal Secretaries from the ministries of Education, Arts, Health, National Treasury and Sports.

The 91-year-old will work alongside Athletics Kenya boss Jackson Tuwei. The board is expected to

manage the fund, prepare and submit quarterly reports to Rotich.

They are also tasked with developing infrastructure and facilitating Team Kenya for their national assignment.

But with this appointment, Kenyans have asked why Awori, who turned 91 on Wednesday, had to be appointed to the board instead of young people.

During his tenure, President Uhuru Kenyatta said his government will ensure that he tackles youth unemployment.

Uhuru said the government has established a number of initiatives to nurture and build an entrepreneurial culture among the youth.

This includes the Sh6 billion Youth Enterprise Fund, which has so far benefited more than 2,000 youth enterprises and trained more than 200,000 entrepreneurs.

"Awori is 91 years old. He is making a comeback to public service as a board member while his 94-year-old counterpart in Kabarak is enjoying his retirement and pension with peace,"

"Awori, born in 1928, appointed to Sports Fund. Nothing against Uncle Moody, but do they want him to die in a public office so that he can receive a state-funded funeral?"

The young idealistic people truly have a place in our beloved government."

"‏When a Moody Awori trends you fear the worst. When you realise it isn't what you first feared, the shock departs temporarily only to be replaced by more shock and sadness,"

"Awori now being given a state job when we have young energetic lads that can do the job....91 yrs for Gods sake..Then you'll here some idiot somewhere saying that the government is empowering the youths,"

@NjeriwaKamau3 said: "Even a young Moody Awori wouldn't be fit for the appointment. The guy has zero experience in sports. Uhuru is impermeable to basic common sense and logic."

"No hate to uncle Moody Awori but at that age? Is there no one else I mean 91 year old man should be retired, enjoying his pensions,"

@RobertAlai said: "Moody Awori getting appointed on boards is a great insult to the youth of this country by @UKenyatta. How does someone support this? Methuselah."

However I have no doubt that his Hon Moody Awori has some investments and if not, he has grand kids he can take care of.

Stop recycling these fossils. What value can a 91-year-old add to Sports, Arts and Social Dvt in Kenya?"

Another user asked Awori to decline the appointment and allow a young Kenyan to join the board.

"The most noble thing ex-VP Moody Awori can do is to decline the appointment," @AlexMenjoh said.

He added: "Thousands of youths are jobless and can do a better job than him. His future is in the past and the best thing is for him to do is continue investing his billions to create employment for other youths."

Post a comment
WATCH: The latest videos from the Star
by NANCY AGUTU @nancyagutu
News
05 December 2018 - 15:00
Read The E-Paper