No turning back on ban - Sonko 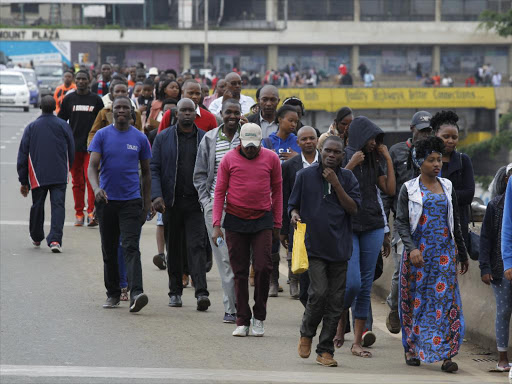 Commuters walk to the CBD from Ngara after Nairobi county effected the ban of matatus from the City centre yesterday. /Monicah Mwangi

Nairobi residents should brace themselves for tough times this festive season.

Governor Mike Sonko yesterday maintained he will not abandon his resolve to bring order to the chaotic matatu sector.

“We must restore order in the county’s transport system. We’re working on an amicable solution to the transport mess. I know Nairobians are suffering but walking is also healthy,” he told the Senate County Public Accounts and Investment Committee.

He was summoned over queries raised by Auditor General Edward Ouko over the county’s 2014-15 expenditure.

Sonko urged residents to support the cause.

He said his administration and the national government will provide a public transport system to ease movement of people living with disability from the designated out-of-town termini to the CBD.

“We are already engaging the national government. We are looking for NYS buses to help transport people with disability. From Muthurwa to the CBD is a one-minute walk. Many people don’t go to the gym. We want them to be fit,” the county chief said.

City Hall in a bold move to reduce congestion in the CBD proposed 10 drop-off points outside the city centre.

The ban took effect yesterday. Hundreds of residents walked to the CBD.

Sonko dismissed Sakaja’s suggestion, accusing him of playing 2022 politics. “I expected Sakaja to be part of the solution, being someone we campaigned together with. We have been holding public meetings since I assumed office,” he said.

Sakaja defended himself and faulted Sonko for failing to ensure security of commuters before implementing the radical decision.

Nominated Senator Beatrice Omanga took the governor to task to explain when public participation was conducted.

Today, Sonko is to appear before the Senate Committee on Roads and Transport chaired by Kiambu senator Kimani Wamatangi.