US to seize and auction Akasha brothers property in plea bargain 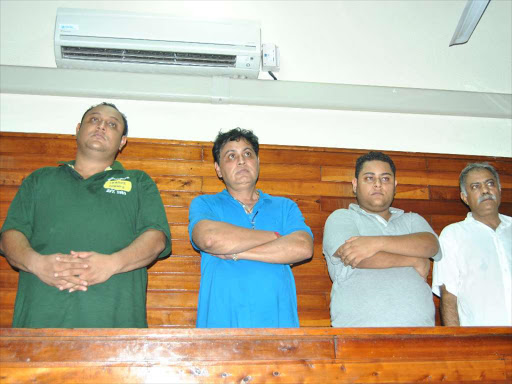 The US government will seize and auction properties worth billions of shillings owned by the Akasha brothers as part of their plea bargain.

Court documents seen by the Star show the American authorities struck a deal with Bakhtash Akasha and Ibrahim Akasha in exchange for a lenient punishment after their conviction.

US attorney Geoffrey Berman says, in the court documents, that the two brothers agreed to surrender their properties said to have been obtained directly or indirectly from the proceeds of drug trafficking.

The duo also agreed to forfeit properties used or intended to be used to facilitate the commission of the offences. “It is further understood that any forfeiture of the defendant’s assets shall not be treated as satisfaction of any fine, restitution, cost of imprisonment or any other penalty the court may impose upon them,” Berman said.

Bakhtash and Ibrahim pleaded guilty to six counts of drug trafficking, bribery and violence which hold a life sentence with a mandatory minimum jail term of 10 years.

Four of the six counts relate to the period between 2014 and January 2017 of drug trafficking while the fifth charge relates to use of machine guns and destructive devices to further their drug trafficking activities.

The other charge is that of obstruction of justice.

The first five carry a maximum sentence of life imprisonment and the sixth, 20 years in prison.

The Akashas were arrested on November 9, 2014, in Kenya after providing 99kgs of heroin and 2kgs of methamphetamine.

The arrested was made through an undercover operation masterminded by the US drug enforcement agency.

Details of the agreement show that the Akashas would have been sentenced to life imprisonment for the offences had the case gone to full hearing.

The agreement shows there is a possibility they can be released after serving a minimum custodial sentence of 10 years or a minimum supervised release of five years.

The term could also be reduced by having the sentences for the six counts run concurrently instead of consecutively.

The Akasha family, that lived a flashy lifestyle, boasted of property worth over Sh20 billion. Family wrangles and the two brothers extradition to the US has left the family struggling, with almost nothing to survive on.

They had investments in the real estate, houses, businesses, cars among others. Most of the property slipped away from their hands after the arrest and deportation of Bakhtash and Ibrahim.

Several property cases are also pending in court. The family’s remaining properties include two palatial homes; one near Voyager and another near the Nyali Beach Hotel in Mombasa.

The Voyager Beach home is expansive and faces the beach front.

Despite being rich, the patriarch Akasha died without leaving a will. The lack of a will has led to numerous court battles as his sons fight on how to divide the estate.

Akasha had three wives at the time of his death in the Netherlands. His property included Sh500 million in foreign and local banks, six houses, six vehicles, 60kg of gold ingots and jewelry estimated at Sh58 million.

“In consideration of the defendant’s plea to the above offences, the defendant will not be further prosecuted criminally by this office except for criminal tax violation if any, as to which this office cannot and does not make any agreement,” Berman said.

The US government will dismiss any open counts against the brothers after their sentencing. Berman said the siblings also face a Sh1 billion fine or Sh5 million for each of the six counts they have been charged with.

The deal bars the brothers and the government from appealing their sentence that will be delivered in February next year. It also binds them not to vacate the guilty plea based on the court decision.

Berman said the defendants will have no right to withdraw plea of guilty should the sentence be different from the guidelines set.

“The defendants recognises that if he is not a citizen of the US, his guilty plea and conviction make it very likely that his deportation from the US is preemptively mandatory and that he is at risk of being deported or suffer other adverse immigration consequences,” Berman said.

The agreement was approved by Ilan Graff, the co-chief of the Terrorism and International Narcotics Unit.

Post a comment
WATCH: The latest videos from the Star
by By MAUREEN MUDI and CAROL KUBWA
News
28 November 2018 - 06:00
Read The E-Paper