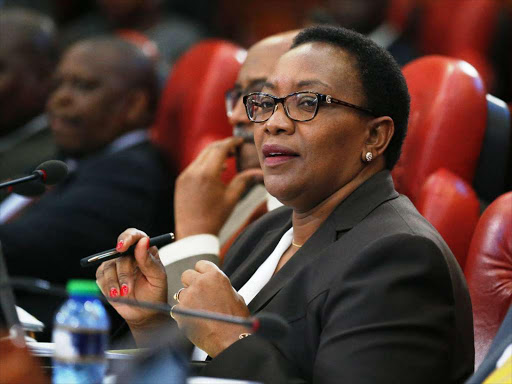 Health CS Sicily Kariuki when she appeared before senators to discuss the matters regarding Medical Equipment Services and Universal Health Care in the country. November 27, 2018. Photo/Jack Owuor

She was put to task on why the lease increased from Sh3.6 billion to Sh9.4b billion, as indicated in the current budget.

Kariuki said the machines remain unused in some counties for lack of staff to operate them, inadequate water and electricity. The CS met senators in Parliament.

The legislators asked why such counties were still entitled to pay Sh200 million each annually towards the Managed Equipment Service (MES) programme.

Vihiga senator George Khaniri said such counties should be exempted from remitting the amount until they have operational equipment.

“Deductions should be stopped in counties that do not have operational equipment. Why do we have a flat figure of Sh200 million lease annually, yet the 47 counties did not receive similar equipment?” he asked.

Moses Wetang’ula of Bungoma asked why the ministry failed to conduct due diligence on infrastructural arrangements before disbursing the equipment.

But West Pokot senator Samuel Poghisio said, “Let’s not change this meeting to look like a confrontation between us and the ministry. Each of these officials belong to a county.”

The session was co-chaired by Majority leader Kipchumba Murkomen and Michael Mbito of Trans Nzoia.

Kariuki produced documents showing MoUs entered between the national government and the 47 county governments. She said all counties signed MoUs that included obligations to ensure infrastructural arrangements were in place to smoothly roll out the project.

In July, the Council of Governors protested the move to increase the leasing amount to Sh200 million, terming it ‘scandalous’.

“The governors learnt with shock that the cost of the MES has moved from Sh95 million to Sh200 million per year, without clear explanations,” CoG chairman Josphat Nanok said.