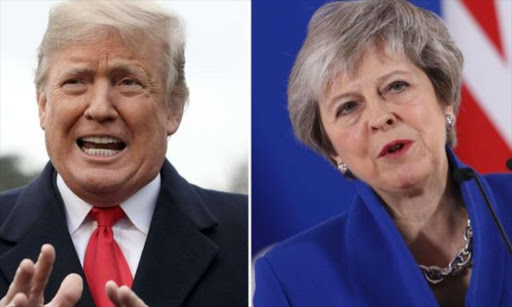 The US president told reporters the withdrawal agreement "sounds like a great deal for the EU" and meant the UK might not be able to trade with the US.

No 10 insisted the deal is "very clear" the UK would be able to sign trade deals with countries around the world.

Meanwhile, the PM will say her deal "delivers for every corner of the UK" in visits to Wales and Northern later.

Speaking to reporters outside the White House, Trump said: "Right now if you look at the deal, [the UK] may not be able to trade with us. And that wouldn't be a good thing. I don't think they meant that."

It would appear Trump was suggesting the agreement could leave Britain unable to negotiate a free-trade agreement with the United States.

However, responding to Mr Trump's comments, a Downing Street spokesman said the Brexit withdrawal agreement struck on Sunday would allow the UK to sign bilateral deals with countries including the US.

"We have already been laying the groundwork for an ambitious agreement with the US through our joint working groups, which have met five times so far," the spokesman added.

The comments came after Mrs May

from MPs on all sides of the Commons on Monday - insisting the agreement "delivered for the British people" by regaining control of laws, money and borders.

MPs will vote on whether to accept the deal on 11 December.