Jitters over PSC plan to limit term of Clerk 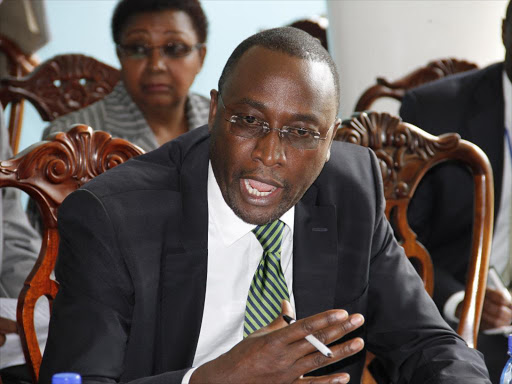 Controversy is brewing over proposed radical changes to the administration of Parliament, including term limits for the clerks.

The Star has established that the Parliamentary Service Bill, 2018, has split staff with intense lobbying and discussion over its implications and objectives.

The bill went into the Second Reading stage on Thursday and MPs are likely to take a vote next week when debate is concluded.

The Justice and Legal Affairs committee chaired by Baringo North MP William Cheptumo has proposed that clerks of both the National Assembly and Senate serve for a maximum term of ten years.

They should be appointed for a five-year term, renewable only once.

The recommendation is seen as a panacea to succession wars in Parliament.

Currently, clerks leave office only when they attain the mandatory retirement age of 60 years like other civil servants.

The proposal has divided staff along tribal lines amidst intense lobbying and scheming ahead of the vote next week.

For instance, parliamentary staff from western Kenya are said to be grumbling that the term limit clause in the bill is targeting Senate Clerk Jeremiah Nyegenye who hails from the region.

“Why are they targeting the Senate clerk, is it because he is a Luyha?” asked one of the parliamentary staff who asked not to be named so as to freely explain the behind-the-scenes intrigues.

Some staff speaking in confidence allege that some lawmakers are plotting to have one of their own take over after the expiry of Nyegenye’s term.

But committee chairman Cheptumo yesterday allayed fears the bill was targeting to cut anyone down to size.

“There have been rumours that we are going to take away powers of some people,” he said. “That is not true. There is no clerk who is going to usurp powers of another clerk.”

Some staff are also opposed to part of the bill which opens up the office of the clerk to competition from other Kenyans not working in Parliament.

The committee has proposed an amendment to qualifications for appointment as a clerk to accommodate non-parliamentary employees who have relevant experience.

The current law requires that one must have 10 years’ experience in senior management and leadership in the public service.

But the committee wants experience to include public affairs.

The provision had given parliamentary staff an edge in ascending to the office of clerk whenever it fell vacant at the expense of outsiders.

“That will demotivate staff from working hard,” said another staff.

Others believe the bill will give lawmakers an authoritarian mandate over staff who claim they are already feeling intimidated and often threatened as they go about their duties.

But the committee is of the view that clerks are constitutional office holders because they are employees of the Parliamentary Service Commission, established under the Supreme Law.

The report says “all constitutional office holders have term limits and the clerks of the House should not be an exception.”

Former National Assembly clerk Justin Bundi retired last year after an illustrious career as a parliamentary clerk spanning 21 years. He served as Clerk of the National Assembly for 7 years before clocking 60 years.

Current clerk Micheal Sialai, an insider who rose through the ranks to succeed Bundi in 2017 at the age of 56 years, will retire in 2021 after reaching the mandatory retirement age of 60.

Bundi’s predecessor Patrick Gichohi had retired in in May 2008 after serving for five years. He had worked in Parliament since October 3, 1979.

As the head of Parliament’s administrative wing, Gichohi had succeeded Samuel Ndindiri who died in office.

However, it is the age of the current Senate Clerk and secretary to the Parliamentary Service Commission that has attracted huge debate among politicians.

Nyegenye is aged only 47 and has served as Clerk of the Senate since 2012. He was initially Parliament’s director of legal services from 2007.

Fears he could remain in office for at least 13 more years before he exits from the powerful office could have swayed the MPs’ to affix tenure to the office of the clerks of the House.

According to one source, Nyegenye is seen as complicating the succession plan at the Senate because he still has a long time before hitting 60 years.

In a drastic move, the committee has blocked redeployment to other responsibilities clerks who complete their tenure before attaining the mandatory retirement age.

“The committee is of the view that an employee of the commission serving on permanent and pensionable terms, and who opts to serve as clerk of a House of Parliament, should be prepared to face the reality of early retirement should he/she complete the term of office before attaining the age of sixty years,” concludes the report.

In a sweeping proposal to streamline administration in Parliament, the committee is pushing to cure a loophole in the law that enables the Senate Clerk to wield more powers than his National Assembly counterpart.

While each clerk is responsible for supervising and assigning duties to staff deployed to their respective Houses, a constitutional provision which designates the Senate Clerk as the Secretary to PSC and accounting officer of Parliament has given the office more powers over supervision of all staff in Parliament.

The report says “stakeholders who presented views before the JLAC argued that since the secretary of the commission is also the clerk of one House of Parliament it was wrong to designate the secretary as the authorized officer for all staff employed by the Commission.”

The designation effectively means that the affairs of the National Assembly shall be run from the Senate, an undesirable if not unconstitutional situation given the bicameral nature of the Kenyan Parliament as set out in the Constitution, they argued according to the report.

The panel arrived at the conclusion after studying how the UK’s House of Commons and the House of Lords work seamlessly without conflict.

The committee also recommended entrenching the Office of Joint Services, which has been existing without a legal backing, in the Constitution.

The office will be responsible for essential services in Parliament including administrative services, finance and accounting, information and research, buildings and maintenance, security services, commission secretariat and internal audit.

However, the committee cautions that care should be taken to avoid the Joint Services encroaching on the mandate of the clerks of the Houses.

“As such it is not desirable to give the head of the Joint Services powers that would compete those of the clerks,” noted the report.

The Office of Joint Services if currently headed by Clement Nyandiere.

Other jurisdictions like the USA have such an office as a neutral department that oversees cross-cutting functions of the bicameral House.

The bill seeks to repeal the obsolete Parliamentary Service Act, 2000, so as to entrench the legislature into the 2010 Constitution like other commissions.

The radical provisions are almost backed unanimously by Senate and the National Assembly are seen by staff as aimed at tilting power in Parliament.

The recommendations have spawned tension among hundreds of parliamentary employees, who are among the best paid public servants. But MPs are determined to legislate the proposals to attain more control over staff.