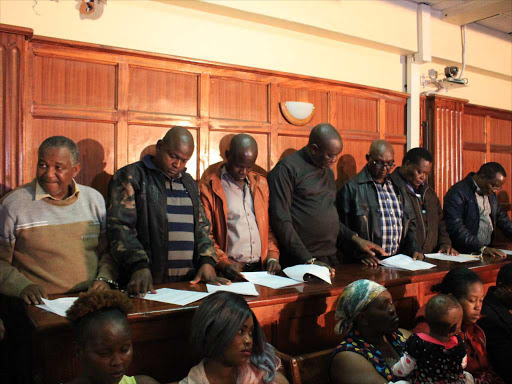 Director General NYS Richard Ndubai at a Milimani court on Tuesday,May 29 where together with other individuals among them Principal Secretary in the Ministry of Public service ,youth and gender affairs Lilian Mbogo Omollo were charged with corruption at the NYS. PHOTO/COLLINS KWEYU

Suspects in the Sh226 million NYS scandal have asked a court to bar politicians from commenting on the case.

Lawyer Assa Nyakundi, for the defence, asked chief magistrate Douglas Ogoti to grant them the prayer.

This came barely days after President Uhuru Kenyatta said that NYS looters must be punished and forced to return stolen cash.

The President, during a pass out parade for over 16,400 servicemen at Gilgil on November 16, said the government will do everything within its power to ensure the monies are recovered.

"We will do everything

Uhuru made the remarks during a pass out parade for NYS servicemen in Gilgil on Friday. Over 16,400 recruits graduated.

Former NYS bosses are in court over the loss of millions of shillings at the agency.

and 35 others have been charged with theft of

But their lawyer, in submissions before the magistrate on Wednesday, argued that such sentiments amount to sub judice.

"It is this court that is trying the suspects...not the politicians," Nyakundi said, "Stop public discussions of this case since they defeat the right to fair trial."

Citing political interference, the lawyer said the court should be allowed to arrive at a decision on the matter before it without undue influence by politicians.

NYS has been a subject of the national discourse as leaders demand accountability on the side of those mandated to run the agency.