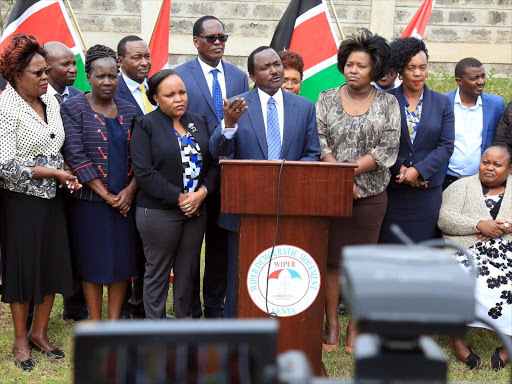 More MPs have publicly opposed the Bill seeking to raise the number of women representation in Parliament.

Last evening, some National Assembly members opposed the Constitution of Kenya (Amendment) Bill, 2018, in the House.

Tongaren MP Eseli Simiyu said the Bill sponsored by Majority leader Aden Duale will not empower women to clinch leadership positions but will only bloat the House.

“While this is a good step in trying to fix the problem of having few women representatives in this House, it is a lazy way of going about it,” he said. “Let’s bite the bullet and make a proper legislation that will ensure the women are also represented here. Otherwise this is too lazy and won’t work.”

Simiyu told the House that the electoral system should be overhauled to ensure election of 290 MPs complies with the two-thirds gender rule.

“We need to look at proportional representation so we have 290 who will be gender-balanced. The disabled and the youth will also be included without necessarily bloating this House out of proportion,” the Ford Kenya lawmaker said.

“We need to consider the cost that Kenyans will incur to cater for this representation. It’s high time we considered the number of Kenyans who would be introduced to this House,” he said.

Some lawmakers who spoke to the Star at Parliament Buildings declined to confirm whether they support or oppose the two-thirds gender principle for fear of being blacklisted by their political parties and the electorate.

“If say I support this principle, my people will think that I’m one of those who want to increase the wage bill of this country. But if I say I don’t support it, I will have a hard time with my party leadership. I reserve my comments and wish to make my decision during the voting,” an MP said.

The legislators are expected to either endorse or reject it today. The bill requires the support of 233 MPs (two thirds of all the members) to pass. If it sails through the House and is assented to by the President, it will be effective after the 2022 General Election.

Duale has maintained that it is crucial for the 12th Parliament to safeguard the Constitution by endorsing the bill.

“We need to make a decision as a House to actualise the provision in the Constitution that has not been implemented since 2010,” he said.

Kimilili MP Didmus Barasa said the bill does not provide a clear formula for picking women to attain the threshold.

“I ask my fellow MPs to reject this bill. It doesn’t give an opportunity for the rural woman to choose who will represent them in Parliament. It instead grants political parties’ leadership powers to bring slay queens through nominations,” he said.